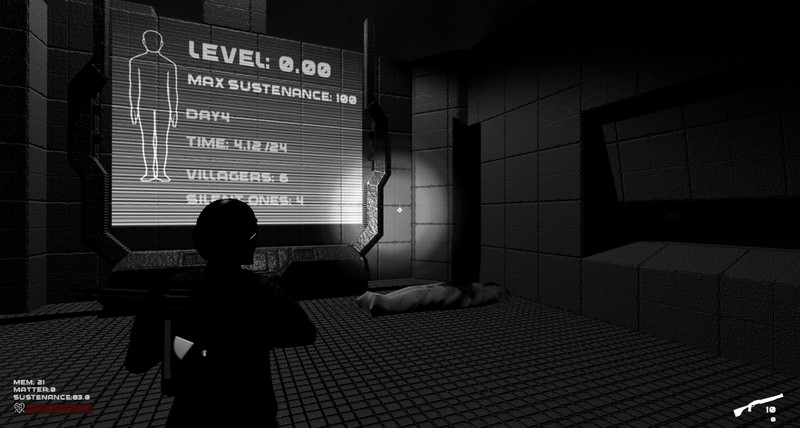 It starts on the 4th day. Ever since you arrived on this planet, you've felt a dark influence. You've lost all memories of your previous self. Who you've become is an even bigger mystery. The darkness hides the truth, and maybe it is in the darkness the truth should remain hidden. Something sinister has happened, but you don't know exactly what took place. These dark silent ones, why do they want to kill you? When death arrives, why does it start all over again... You know you have to escape this planet, and this endless time loop. Yet there is something itching your mind, something tells you you'll have to do more than just escape...

-Gather enough meteorite and fuel to power your spaceship to escape

-Robots allies that will help in collecting resources, or resources you've tagged

-This planet was named after the blind idiot god Azathoth. When traversing outside the base the darkness can be blinding, it is essential to use your flashlight and radar to help find memory fragments and meteorite. This planet was also named after Azathoth for many other reasons...

-You can get sustenance in your base, but getting food requires going out and scavenging buildings

-To escape requires balancing your body's needs with keeping the base running along with collecting fuel and meteorite for your spaceship. How you balance these task's will determine how quickly you can escape the planet. Not paying enough attention to your sustenance level, and being too far from base will lead to death

-Saving is an important resource. It requires converted matter, in which you can enter an altered reality with the same time, and resources accumulated along with respawning everything. You can also use it to restore your health, but be wary it will reset bullet counts and weapons. When you choose to save will become strategic

-The silent ones blend in with complete darkness, you'll have to rely on the reflection of their skin to shoot them correctly. Be wary take too long to aim, and they'll teleport

-Play from the perspective of the enemy, and see how they really perceive you

Nightmare on Azathoth will continuously be updated from the nightmare realm. 7aa9394dea 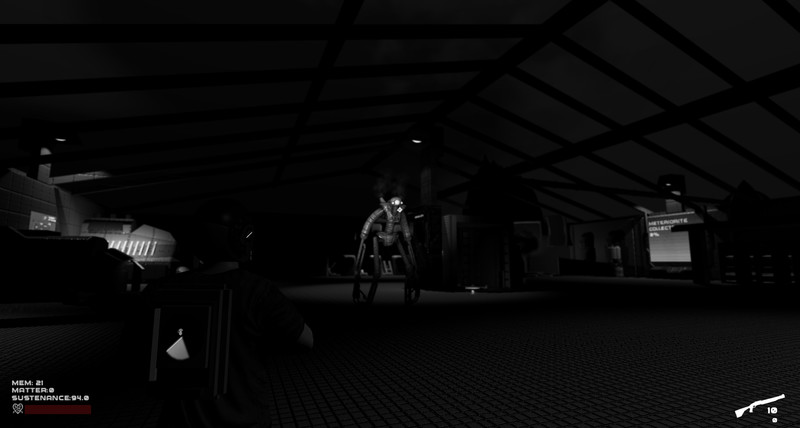 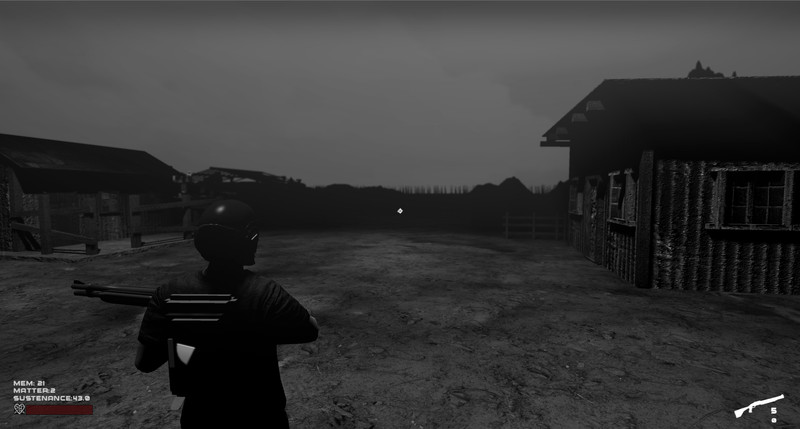 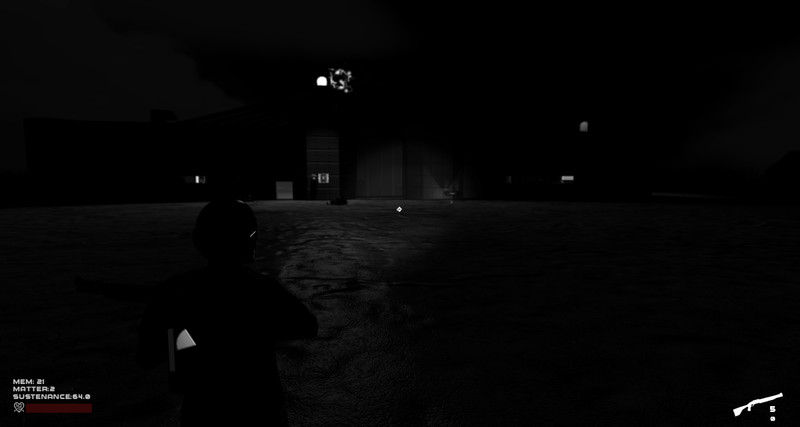 
Scares the living\u2665\u2665\u2665\u2665\u2665\u2665\u2665outta me. Seriously though, I'd say this is a good 8\/10. Graphics are alright, the lack of color makes the...fog, seem really freaking awesome, the Lovecraft influence is strong (ALWAYS a plus), the enemies scare the crud out of me, etc. Every time I die and start over I'm afraid to set foot outside again, and very few games do that. You have a gun, and usually the lack of defense is what makes survival scary right? Nah. The survival mechanics in this game (scrounging for ammo and all that good stuff) make shooting somewhat of a rare thing in this game. I still usually blow through my ammo starting off because the DOs are frighteningly creepy. The big floaty thing, creepy. This game, creepy. In a very very very good way. I suck at writing reviews but there isn't a good reason not get this game if it's on sale (a steal at 3.59 atm). You probably won't regret it. I didn't in the slightest.

Gee, I REALLY suck at reviews, ugh. Tl;dr = Buy game pls, is scare. I was attracted by the Lovecraftian reference, Azathoh. With that said, the only thing Lovecraftian about it (in the 8 minutes I played it) was the futility of trying to kill the intruders. Simply put, my shotgun didn't work.

While I like the premise, its delivery needs some work. The flashlight nees some work; the weapons need to fire; the voice acting needs better pacing. The graphics remind more of ca. 2000 CE blockiness.

Still, I'm not returning it (I did get it on sale, so if it is never improved upon, then I'm not out much money). Do I recommend it? In its current state, no. However, I'll come back in a few months and check it again.. Terrible game. Should really not be on the Steam store. Extremely unpolished, absolutely no tutorial and overall just a pointless waste of time. Developer couldn't evenbe bothered to include corpses. When you kill something it simple vanishes. Seriously, this should be an extremely rough concept for a game, not sold as a game in itself.. I like Nightmare on Azathoth. It's an interesting survival game on a planet of darkness. Even daylight doesn't reach the ground, as the creatures you face push away all light on the surface. The enemies are troublesome without being ridiculous (except for the flying head) and are original in their simplicity (except for the flying head). I like the resource management, I like the giant floating monster that summons enemies to attack you when it gets close enough, I like the power system.

But, let's try and focus on being optimistic. Maybe it wasn't theft after all. Maybe Modesto Rabena got permission and used the model. No idea. What I do know is that it means that they decided not to make something original for the game. Even a different looking model would've sufficed.

In the end, I do recommand getting Nightmare on Azathoth. It's difficult in the beginning because of the lack of a tutorial but, you learn quickly by doing things. Once you learn the game becomes significantly easier but, it will still take you time to complete, and the longer it takes the harder it will get as The Silent Ones will become more numerous. It's a fun game, and I do enjoy it. Just wish the flying head monster wasn't so suspicious.

Edit: Upon seeing my review, the developer took time to let me know that it wasn't theft, and that they will be making changes to the flying head in both look and glitchiness. So now I recommand Nightmare on Azathoth even more, since the developer seems willing to fix bugs and errors in the game as soon as they are caught!. This game has a very dark and tense atmosphere, it is very creepy and obvious is the impact of H. P. Lovecraft , which was the first reason to buy it . The story is unclear , even you are not sure what are you are doing, you do not know what your goal is, which only adds to the tension and unease that the game has . Action is well done , sounds are excellent , although the overall impression is that the game needs finishing and polishing. Finally, I would recommend this game to all fans of horror .. *Updated review*
I have to commend the dev for rolling out these updates quickly. I liked the the game when it first came out, but now that it has been updated it is much better. I do notice that the enemies don't teleport as quickly as before making it easier to handle them along with the new main weapon. The new UI interaction notification thing really helps to understand what each of the machines do. The meteorite search machine is much better that it is shorter as it wasn't intuitive to look up to see what it does, now you can easily see the direction of meteorite. The new animation of the main character, and the totally different main weapon feels much better. There is no more pistol like in the preview, but kind of like a semi automatic rifle now. It has a nice weight to it. Overall I think there were more changes but I can't list them all off the top of my head, but now the game feels much more polished.


old review
{I think I am starting to get the hang of this game. I found the "encounter" with the enemies to be challenging, and they can be a bit scary as your radar only picks meteorite or memory fragments, they can be creepy especially when they pop out of the shadows. I like the concept and direction of the game so I'd recommend to those that like challenges. I get satisfaction from figuring out how to survive.}. This game has a very dark and tense atmosphere, it is very creepy and obvious is the impact of H. P. Lovecraft , which was the first reason to buy it . The story is unclear , even you are not sure what are you are doing, you do not know what your goal is, which only adds to the tension and unease that the game has . Action is well done , sounds are excellent , although the overall impression is that the game needs finishing and polishing. Finally, I would recommend this game to all fans of horror .. If you're looking for a short good survival game, with a creepy atmosphere, an absence of scenario that makes the game more uncomfortable, then you found it. you don't have time to think, it's a constant search for ammo, food supplies, dark matter (fuel), and meteorites.You need to know your area, and your way back to your headquarters. Don't forget to keep an eye on your level of sustenance and food, on that strange entity hovering, be careful about the annemies i call the dark dancers. I like their shape. They clearly look like they're coming from a lovecraft story. This a game i recommend just for the atmosphere. As i said don't expect a story or an explanation, just try to get out of this planet.. Not the craziest epic horror game, but for an indie game it's very good.

Well I dont really have much to add, just wanted to vote up this game...

The character and HUD remind me a bit of dead space, which is great.

You're a man whose ship crashed on a planet, you spawn in a base and have to explore the environment in order to find ressources to survive (food,ammo,other stuff used as spare parts...) you'll encounter various monsters that are pretty creepy (a huge flying head, a dancer-like slender creature that changes the music when it charges you...) overall the game has nothing but black\/white\/grey colors, it is very.VERY.VERY dark.

It's not for everyone, but it has its good sides such as a relatively challenging survival aspect, mistery, and an interesting creatures design.. There is literally, nothing to see