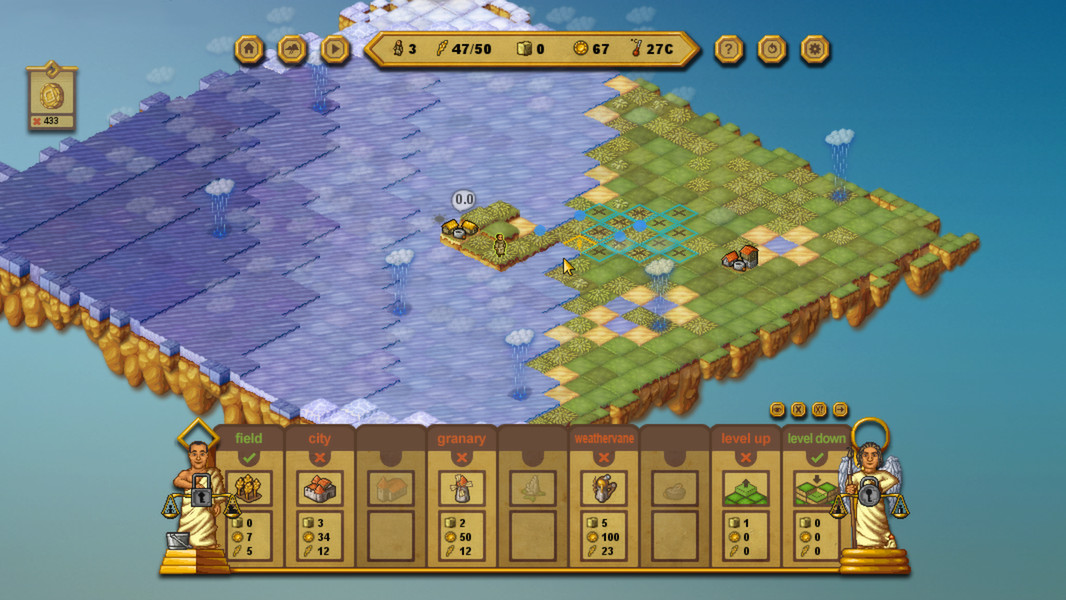 Have you ever wanted to change the weather? In Cubesis you can completely change the climate from tropical to icy. As the leader of the Cubies, you have to please your people, which means you will have to change the world wisely because it works as a fragile clockwork, and because it is guarded by two gods: Ikjuch and Likael who can be cruel and generous at the same time. Only you will decide if they will help you, or destroy you. Come and lead your people through a challenging journey: charming and yet unknown world awaits you!

Cubesis is a turn-based strategy game with puzzle elements, centered around the fragile balance of the Cubeworld. You have to solve strategy-like puzzles and the way to their solution is beset by many obstacles: for example the sea. To overcome such obstacles, you need to figure out what pleases the gods Ikjuch and Likael. 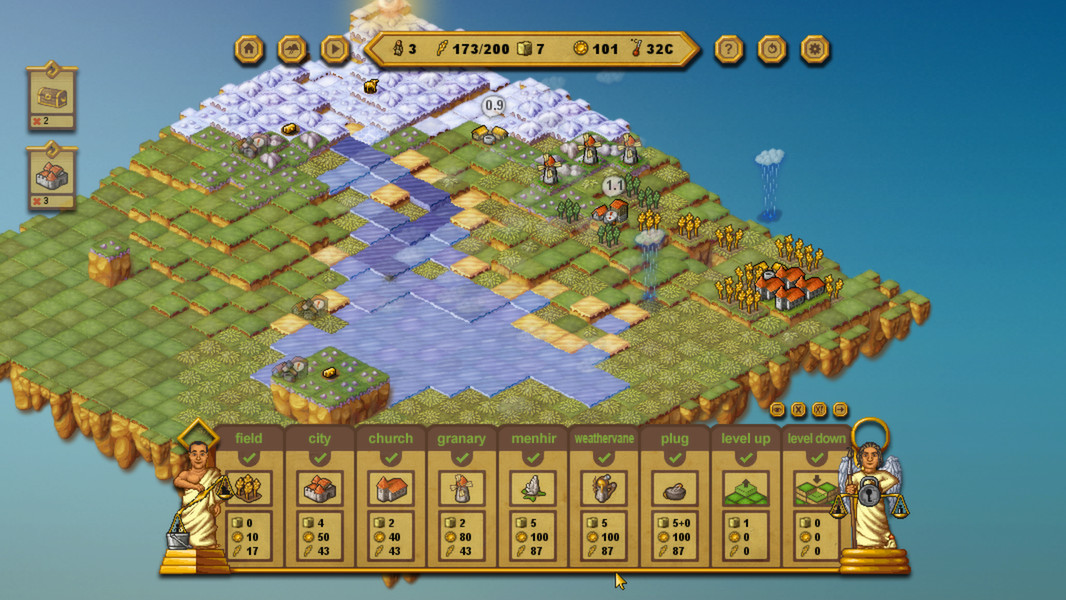 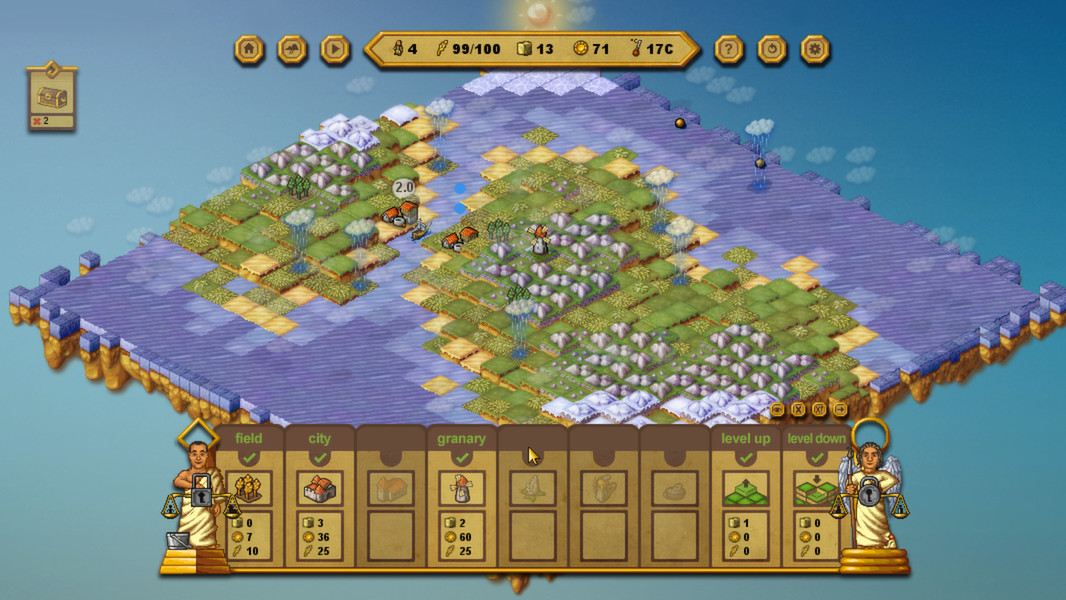 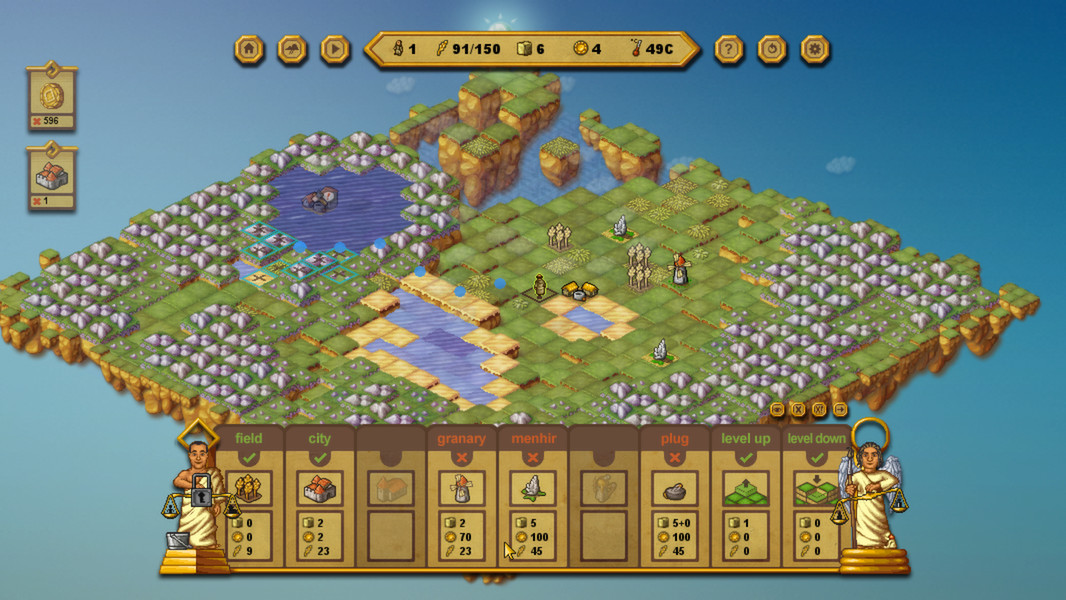 
Like the concept. Good old civ-builder with a potential. Game attempts to be Populus more or less, but with an easier entrance point. The rate of aquiring wheat, the main resource is shown by each field, not overall, and little things missing like that add up to undermine gameplay. Using a unit to do anything kills it, with good measure cause you never seem to want population, but it makes gameplay tedious, and god games usually have some elements of tedium but this game it is the bread and butter, all micro. It would be forgivable if it was fun, but sending your minions to their doom doesn't even give you the satisfying pop noise lemmings did, nor does the game challenge you to master it's minusia. Once I got to the level that wanted me to mine through the world I found the few camera controls massively insufficent. This game just doesn't leave much satisfaction, but is happy to eat up your time without good reason. Seems like the game just needed polish to make it more smooth and enjoyable, but what currently exists is just rather bland.. Just let us skip the ♥♥♥♥ing tutorial!. An interesting approach due to the lack of war units. farming simulators are popular right now so, building irrigation rows is also a quite entertaining task.

. This game is not very enjoyable. The graphics are painful to work around and the isometric layout does not help either. The zoom function is beyond useless. The game essentially forces you to mindlessly replant fields whilst slowly inching units across the map to reach some treasure chest. I am up to the second mission on the campaign, the game is very dull at this point and I can't see it getting any better. To be frank I have had more fun playing 20yo titles like simearth than this, I expected some kind of neat and engaging puzzle/strategy game. But I got this instead.. Unlike other puz-builder games, we don't have wars here, so the plus is that I can focus only on building the city. Sometimes there is a problem with clicking on the appropriate box, the zoom is too big. In addition, the game is getting better - I recommend it.
. Some of these reviews are just plain silly, specifically where his only complaint is it has a tutorial that you have to do before you can play compaign. I'll tell you right now being a few misions into the campaign, you won't undersand the details of this game had you been able to skip the tutorial.

I would desribe this game as a stategy\/puzzle game where you're to come up with the best plan to manage your resources and please(or displease) the gods to successfully complete an objective for each campaign mission. I briefly explain each:

*Resources - Your resources basically come down to the people, grain, gold, and stone. You want to usually build a city first because these will keep your population respawning. You use your population to gain your grain and stone. This is really the KEY thing you need to understand to really understand this game, your people are a RESOURCE and sacrifice themselves for other resources. So if you need stone, you have a person dig down into stone, they die, you get stone. As long as you have a city more people with respawn so its worth to sacrifice them to plant builds and get stone(plus less the population, the less people there are to consume grain.

*Gods - There are two gods. The first, you make him happy by having a higher churches built: to population ratio. When you do this and he's happy the water level will lower, when you have more people than churches the water rises. An example of when to use this is if you need to get across a sea, you make him happy, lowering the water level, allowing you to walk across the seabed. The Second god goes off of how many shrines you have built. Having more built will start to cause an ice age freezing everything other, and eliminating them warms things up. An example of using this is to freeze a body of water to walk across it to get to your objective.

And that's the basics of the game! It is a really interesting and fun game when you understand this and figure out the best way to use it. It is a bit of a thinking man's game, and honestly I think that's where a some of these short gametime\/short attention-spanned reviews come from.

If you want to try a fun, interesting, and unique approach to a strategy\/puzzle game where you may have to think some, definity give it a try. :). Like the concept. Good old civ-builder with a potential. Take a look at Cubesis http:\/\/youtu.be\/n53CBokI7mk<\/a>. This game is not very en...