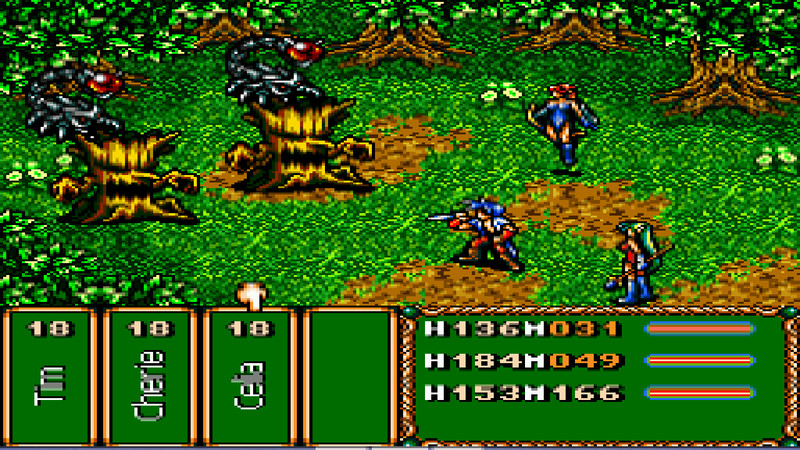 This world was once a civilization brought together by magic and technology.
As civilization advanced, those who possessed the power of technology and magic segregated due to their differences in ideas and formed two separate societies of humans and demons.

The human race continued to develop their civilization with technology, while the demons started to construct their own society with magic.
This balance did not hold for very long, however, and technology was gradually replacing magic.

Soon afterwards, an ultimate weapon from the technological civilization appeared, and in an ironic twist of fate, lost control and destroyed the whole world, along with all civilization therein.

Nearly a thousand years have gone by without incident, until one day the ancient technology lying deep within the Earth was excavated.
Mankind was once again on its way to committing the same mistakes of the past…

Since long ago, the world has stood by four mysterious temples controlling the forces of nature, each protecting a kingdom.
The Cruz Kingdom governs the water with the Moon Temple. It paints a beautiful picture of a land covered in water.
The bold Galien Kingdom emerges as a tropical desert climate near the Sun Temple. It is a unified, intrepid kingdom.

In the polar regions is the Zak Empire. Its technical research has flourished with the power of the Star Temple.
The Lear Kingdom lies among a picturesque scenery protected by the Wind Temple. It is a matriarchal society.

The world was at peace, when suddenly demons from legend appeared throughout the land. Humanity panicked and was at a loss. What have the demons come for? What secrets do the temples hold? Just who is behind all of this? Who will see through this shrouded mystery?

Battle Saga - The Legend of the Magic Warrior is a Sega Genesis game that came out only in Taiwanese markets. It has been fully translated to English. The Game features great battle system, party system, spells, summons, and a turn based fighting engine. Enjoy over 40 hours of gameplay for only $4.99! a09c17d780 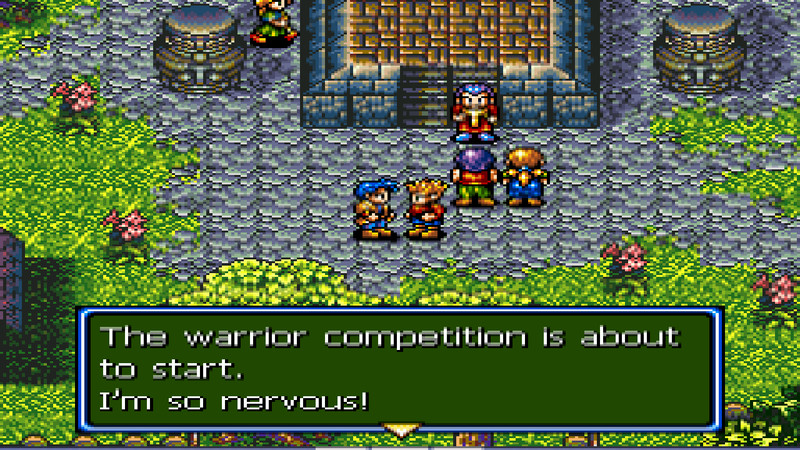 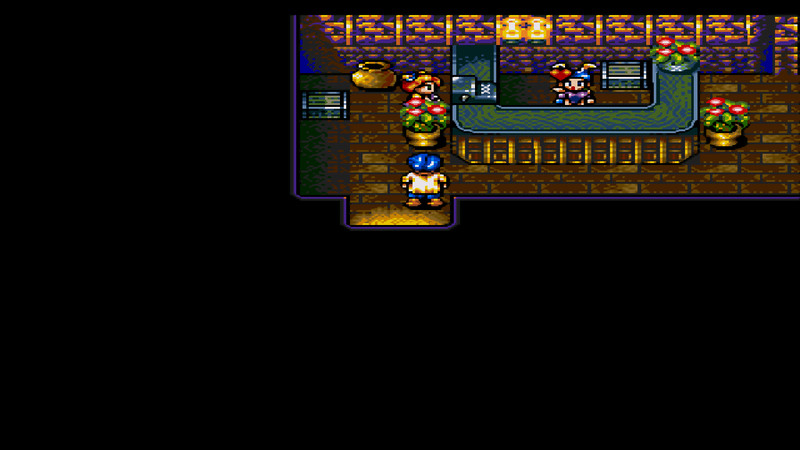 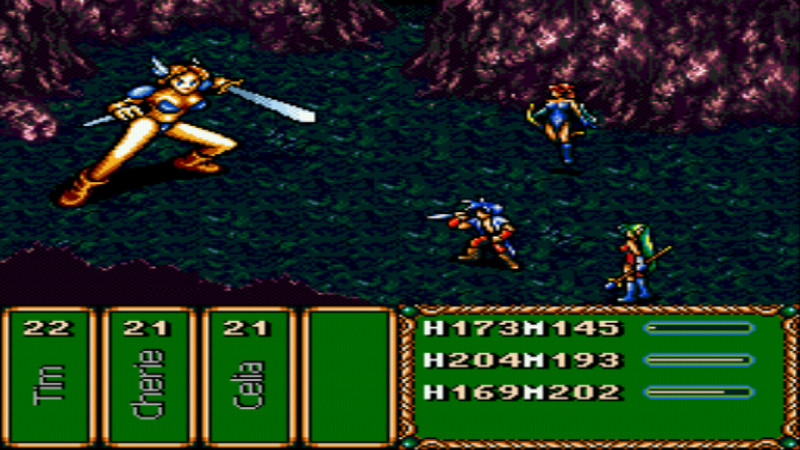 Just to start off, this uses the Mednafen emulator, which works fine, though it had a few hitches. For some reason the emulator's "Pause" function doesn't work at all, and there were a couple of times where the audio desynced and the only fix I could find was to restart the emulator.

Although the preview images and videos show the image all stretched, it's actually far more reasonable, using the base 320x224 Genesis resolution (game looks chunkier at x1 or x2 scaling). The emulator allows up to 4x scaling with or without smoothing and it adds a neat little border when playing in full screen. The game only uses the ABC face buttons so configuring XYZ is not necessary. Steam overlay works fine. Now, into the game.

While the story's not exactly groundbreaking, it's got a couple moments that made me go "huh" in mild intrigue.

It's obvious the spritework and stuff was quite heavily influenced by games like Final Fantasy VI, but hey, they still look real nice.

The music is good, but the sound effects are kind of wonky. A lot of them are really quiet and certain events (getting hit, for example) produce no sounds at all which robs them of impact slightly. I don't know if this is an emulation quirk or if the game really was this way, but it definitely sounds off.

There are no random encounters, all encounters are portrayed as sprites in the world that initiate a battle when touched, though oddly most of the sprites have no correlation to what you'll be fighting, so I guess they're random in that aspect. One downside I'd note is that the screen uses this lazy scrolling where the you're always off-center when moving which annoys me a little, but it still leaves enough room to react to any potential enemies ahead.

Battles are in the standard turn-based style, which is totally fine by me, although I'll admit the fighting in this game boils down to only using Attack on the regular enemies and only using Spells to spam your strongest magic during boss fights since magic sucks against groups. The game has an option called Real Time Battles that essentially works like the ATB system (from Final Fantasy IV onwards). That option won't affect the pacing of fights much though, since it only "pauses" during submenu navigation if you have it set to Off.

The battle UI is a bit clunky, there's a Repeat command that performs the same move that character did the preceding turn, but it's useless because the battle cursor memorizes the last action you did and defaults to that on each turn. It's also a bit awkward to only be able to use left and right to navigate targets.

I didn't have to stop progress a single time to grind, but then again I engaged in a lot of battles voluntarily. I also didn't feel over-leveled except at one early point in the game, the overall balance felt pretty good.

In summary, this game definitely deserves my recommendation. Even though it is pretty derivative in some aspects, I still found it a very enjoyable experience through and through. Give it a shot if you're in the mood for an old school RPG.. Cute little basic 16-bit JRPG. For a game made for the Sega Genesis, it has a very nice and vibrant color palette. Also the game is full of some HOT JAMS, the battle music is pretty good, which is nice considering you will be in battles very often. The battle system is your classic ATB style Final Fantasy, but with a style moreso resembling Capcom's Breath Of Fire games. The game is like Chrono Trigger and the Lunar remakes where instead of random battles, enemies roam the fields\/dungeons and you can navigate yourself away from them. Although generally they are pretty packed, so it ain't easy to always get around them.

Thankfully, Fleeing from battle isn't a completely crap\/risky option as with some games, since it only uses that characters turn that makes the attempt to escape, and a Successful escape will get the entire party out, and a Failure does not yield in losing out on your other characters turns. Furthermore, escaping will remove that enemy from the field\/dungeon for that instance.

With that said, it's a pretty typical 90's 16-bit JRPG. You proceed through fields and dungeons roaming with enemies, and plenty of treasure chests to nab (Usually housing junk you won't care about like Herbs and Antidotes, but sometimes pack something decent like a new Magic Spell or Equipment you won't be seeing again for awhile), and of course bosses to tackle. New towns await with NPC's and shops to hit up to upgrade your characters, although NPC's usually don't have much interesting stuff to say beyond some hint drops on what to do next. If you're looking for some charming dialogue along the lines of the Lunar games or multiple dialogues from each NPC like Chrono Trigger, you won't see any of that here. I find the music in this game pretty god damn dank, my only real complaint is the sound effects in battle are far too quiet. In this game you buy your magic spells like in the older Final Fantasy titles, and you equip them to your party members. You can swap out spells around characters, and even sell them back if you need some money.

The game so far is pretty linear, and the story itself isn't much of anything special. Mankind basically destroyed itself in a war between humans and demons, humans prioritized science and technology above all else, while demons focused on developing their magic. Eventually, the humans began developing dangerous weapons, one in particularly that nearly wiped out life on the planet, and it took centuries for civilization to recover. However, a number of demons survived and have been plotting to finally take the world for themselves with humanity now at it's lowest point with their powerful technology lost.

You play a young man named Tim, who is from a small isolated village that produces great warriors by holding a competition every year to decide the strongest among them. Tim takes part in competing, and some foul play from his competition results in him being exiled from his home. Now Tim must fend for himself and explore the world around him to forge his own destiny, and perhaps find some answers he's been missing.

Also it needs to be said this game is absolutely SHAMELESS, and straight up rips from popular 90's RPG's. Many of the sprites and graphics will probably look familiar, and it wouldn't surprise me if they really were straight up rescaled and traced over, such as character field sprites from Final Fantasy 6, map layouts from Final Fantasy 4+5, monster sprites and spell effects from Breath Of Fire 2. Hell the Defense Up Spell effect is directly lifted from BOF2, no lie lol.

All in all, it's not a bad game at all for $5, and if you want a cute little chill old school JRPG experience, it's worth getting. Hell half the fun of this game is just seeing what will get ripped off next in it lmao.. This game has one serious issue that unfortunately ruins the experience completely for me.
There are just too many battles.
The enemies walk on the map but they aren't really avoidable as they move faster and target you.

In fact, the battles are so frequent that one loses orientation of the map because there are so many pointless battles.
Currently I'm in the Moon Temple where I'm supposed to walk around in a "labyrint" where the rooms looks very similar and turn six different switches in order to progress.
I'm just unable to get my orientation of the map, where I've already been etc because of the frequent battles.