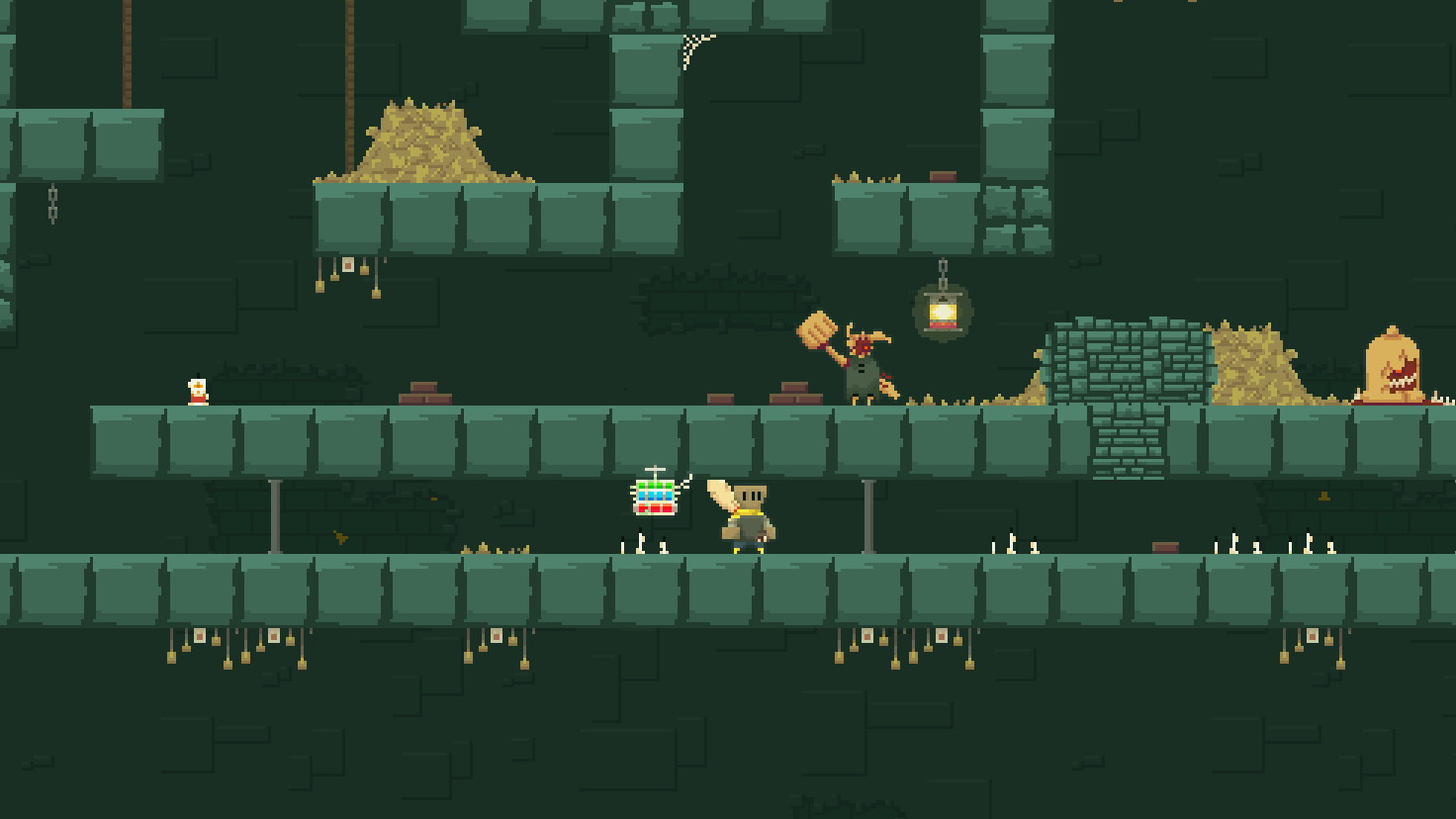 Blessed Surface is an open-world 2d platformer, mixing the depth of its detailed and lively gameworld with fast-paced, chaotic gameplay. Relaxed exploration, a skill-rewarding, diverse combat system, and high potential character-building make up the core of the game.

▬ You can equip two weapons, which have two unique attacks each. A wide range of builds with unique movesets is available. You'll need to find weapons that combo well together, and can adapt to any situation.

▬ Charge up your finishing move and destroy enemies with style!

▬ Timed blocking and other mechanics reward speed and accuracy.

▬ Collect ammo that drops from defeated creatures, and use your gunner mode for some extra damage on more difficult enemies.

▬ Collect armor, guns, melee weapons, and passive or triggered perks. Find what works well together and make your own playstyle!

▬ Nearly every creature you meet has a chance to drop its heart. Hearts give you one passive and one triggered perk, and you can have up to three hearts active!

▬ Hatch a creature as your pet! With a huge amount of potential pets, find the weirdest one to be your companion!

▬ Every armor set has a unique finishing move, as well as a luck stat that gives you a higher chance to meet special encounters.

▬ Level up your weapons by hitting stuff with them!

▬ Events, both random and based on the real-time clock, ensure that you'll always see something different each play session, from different creatures emerging at certain hours, to daily bosses, to flowers changing color throughout the year.

▬ There's also an in-game ecosystem. Every monster you kill makes an impact on the population. Monsters breed and lay eggs. They multiply with the passing of every real-time day. They have favorite foods, and fight each other. It's a living world.

▬ Lore and writing fleshes out a fairy tale-esque world, telling you fantastical stories about its unusual inhabitants through various sources, including item descriptions and an in-depth NPC dialogue system.

And perhaps, if you are determined, you might just find the Blessed Surface...

Why open-world, rather than a Metroidvania?

There are a few subtle differences, in the way content is structured. Metroidvanias are usually based on going from place to place to find new things and unlock new areas, whereas this game contains more dynamic systems to give you a unique and fresh experience no matter where in the map you are!

For making it to the end, you have been blessed by the Biter of good fortune. 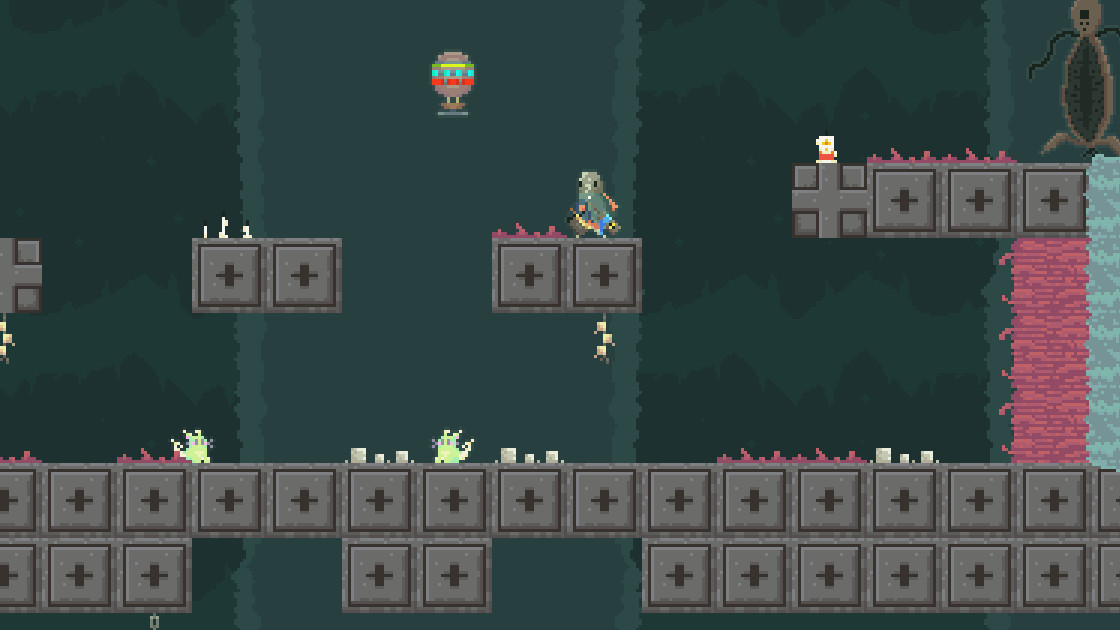 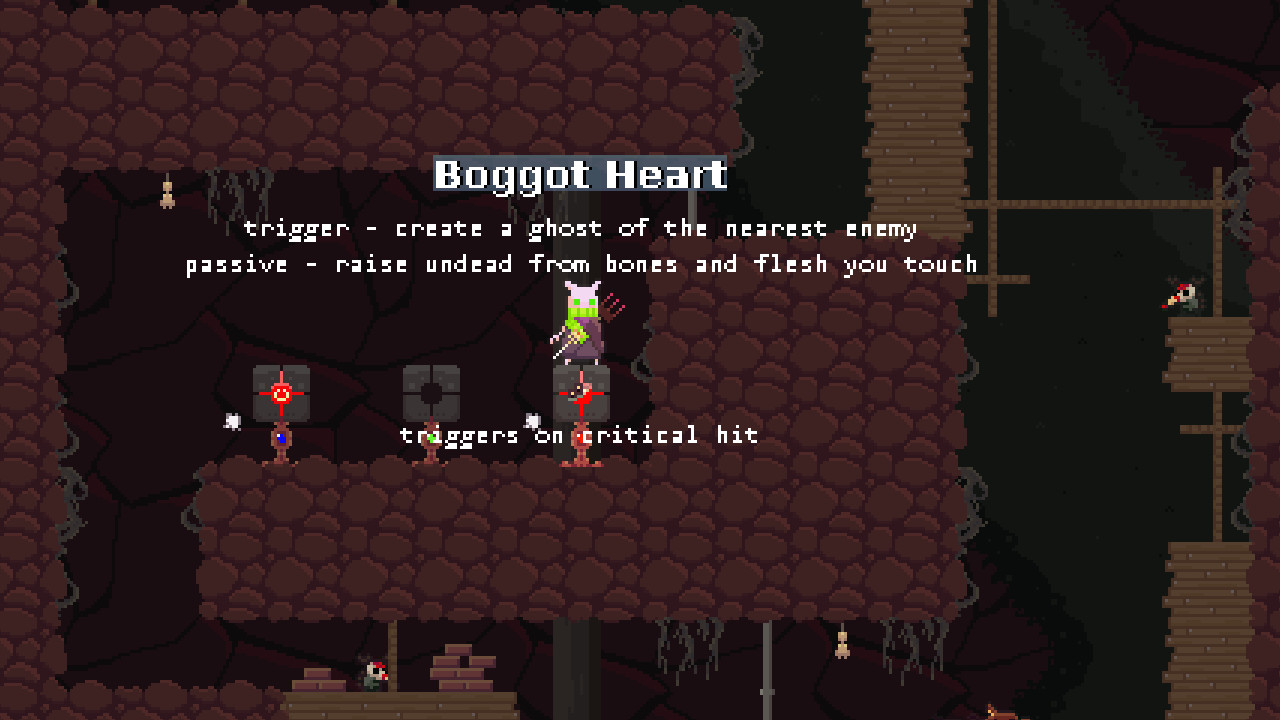 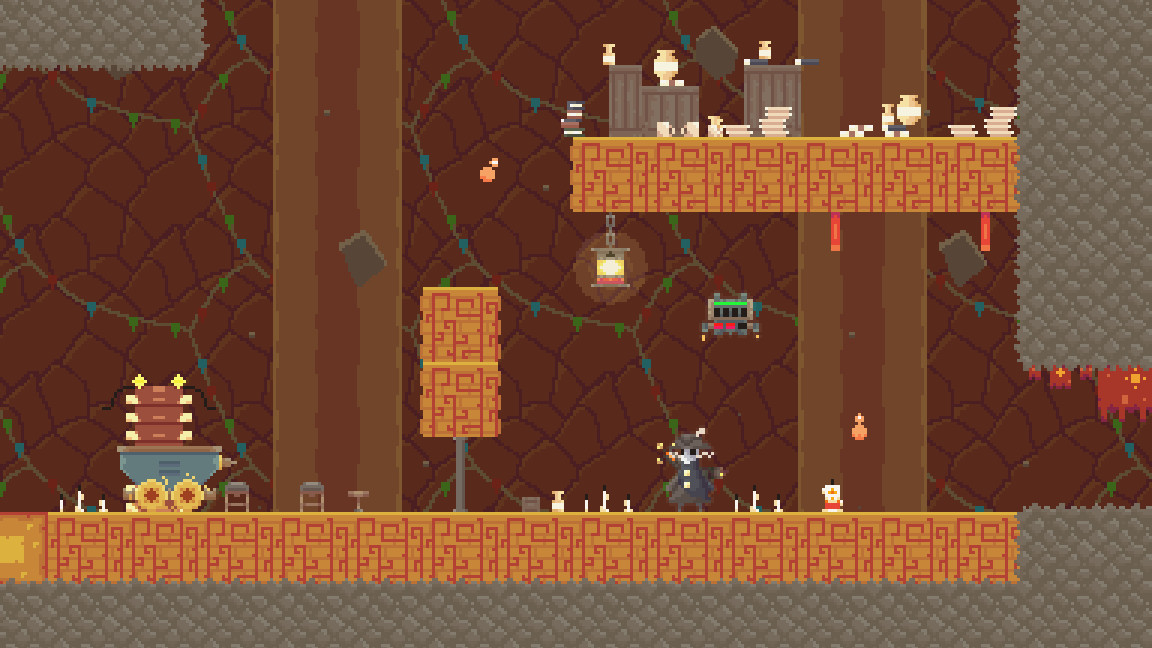 Ok so this game is good

Yes the game is hard and brutal but thats the charm.

No it is not hand holding straight you could litterly skip the first boss and run to the last one if you can find key holders.

Yes it is a good time if you enjoy platforming and dungeon crawling type game play.


. So happy to see the full version's released!

Have loved getting to see it in it's initial stages and how polished it's become from the already unique take on 2D exploration it started out as. It respects the player by keeping the difficulty challenging, even enjoyably infuriating at times. The environment comes alive, with little details like reminding you certain creatures will decrease in population if you decide to go a little to ham on a specific foe. The music really compliments the 8-bit style the games going for. Overall awesome game.. -TL;DR-

This game is one of the most unpolished THINGS I have ever played. It's buggy, it's bare bones, counter intuitive, and above all else, it's weird, weird, WEIRD. There are a lot of problems, but this is also a really creatively designed game with a lot of likable aspects to it. I'm a sucker for experimental games like this, so I still recommend it if you're someone like me. Besides, it's Early Access, and the developer seems to be set on finishing it. Things can only go up from here.
______________________________

This game is.... weird.... like REALLY weird. This game has this zen like quality to it where you can just look around and explore... except when you can't, and the enemies all want you dead. The combat is very simple, and straight to the point... except when it's not, and you end up taking hits more often because you ended up dashing into an enemy, or you pulled it towards you and you can't dodge. The exploration can be really fun and rewarding, with a LOT of interesting places to explore.... EXCEPT WHEN IT'S NOT, and you find yourself in platforming sections on par with a f***ing Mario Kaizo Rom Hack!

Which by the way, if you find yourself making it to where you have to platform UPWARD from platforms directly above you with only one square to fit in, and your character is just small enough to fit in there if you have no downward momentum, no Corpse King. That is legitimately bad level design. Go back and try again, that is s*** design, just don't do that.

I bought this game after the Combat Overhaul, so I have no idea what combat was like compared to now, but considering how counter intuitive the combat is NOW, and judging by reading the change logs, I can only imagine just how truly bad it used to be. I guess being kinda sh***y isn't as bad as being totally sh***y.

Also, I realized that I ragged on exploration twice in this review, but that's for a good reason. One of the big selling points in this game, is that this dungeon is supposed to be a living, breathing ecosystem. There are a lot of games that pull this off very well. Monster Hunter World, for example, allows you to just explore its environments and take in the world around you, and you don't even need to hunt the monsters. You can just watch them in their natural environment. They eat, they wander around, they sleep in their nests, you know, just that kinda stuff.

Now, you're probably saying that it's totally not fair to compare this low budget indie title to a big budget AAA game, but I made the comparison, because Monster Hunter World doesn't tell you that you're allowed to do that. Its main selling point is the boss rush gameplay loop that the franchise is famous for. The ecosystem is an unadvertised bonus.

If you're going to tell me that the world is an actual ecosystem, make it a MAIN SELLING POINT of your game, and then, say that, for example, you can wipe out an entire area by killing the mother and getting rid of all the babies, then I don't wanna see the game randomly respawn them after I've only been gone for 2 minutes! Let me feel like I'm making an impact on this world, damn it!!

Now you may be wondering why this game is still recommended in spite of me constantly harping on it. Well chill, I'm getting to the good parts now.

Simple put, this is one of the most creative games I have ever seen so far.

Like I said at the beginning of this review, this game is WEIRD. Like, your character is just some silhouette, and his entire personality is dictated by what armor he's wearing. The weapons themselves are ALL unique, and none of them are conventional. You have a typical sword, but it looks anything BUT typical. It looks more like some kind of shadow demon monster blood sword. You get this little piranha plant looking claw weapon that you can actually fly forward short distances while using, A sword attached to some... kinda... tentacle looking thing, A pickaxe that makes spikes where you slam it, a Magic staff that does a short range lightning blast (well okay, that is admittedly pretty generic).

I appreciate that the developers has committed himself to not just making a weird game, but going ALL THE WAY with it. The enemies range from weird looking bug birds, or walking spike pine cone looking things, or giant mew mew cats, or even just bouncing red balls! Did I mention this game is weird? Cause this game is f***ing weird!!!

This is one of those games where you have to just sit back, and realize what you're playing. Even the combat is kind unique in that regard! Like I said, the combat is super rough, but I can totally see it working once you've adapted to it! Switching between weapons, shooting from a distance with your weird helicopter cursor thingy, eating hearts of your enemies to gain new abilities, WAIT WUT!?

Experimental games like this are my jam. I don't care how unpolished it is. You offered me a game like this for only 6 dollars. I'd say this was more than worth that price point. I look forward to revisiting this game from time to time to see how polished Corpse King can make this idea, and how far they can run with it.

Also, take a shot for every time I said weird. ;). Brief thoughts after playing this game for a couple hours:

Brilliant ideas. Relaxing exploration and music. Pretty good combat and a nice variety of weapons\/armor. Really unique enemy design. There is a lot going on here. It's a very fun and expansive world to explore. Mixing and matching weapons\/armor is really cool and finding effective combinations to fight and traverse the world is rewarding.

Some issues, though. It is more than a bit clunky. I wish that your character moved with more fluidity. I hate only being able to carry six items at a time, especially when there is useful loot scattered everywhere. The last thing I want is a hand-holding game, but just a little more direction would go a long way. So far, I do not know the significance of leveling up.

Overall I'm looking forward to seeing where this game goes. Worth the price of admission. I'll keep my eyes open for updates.