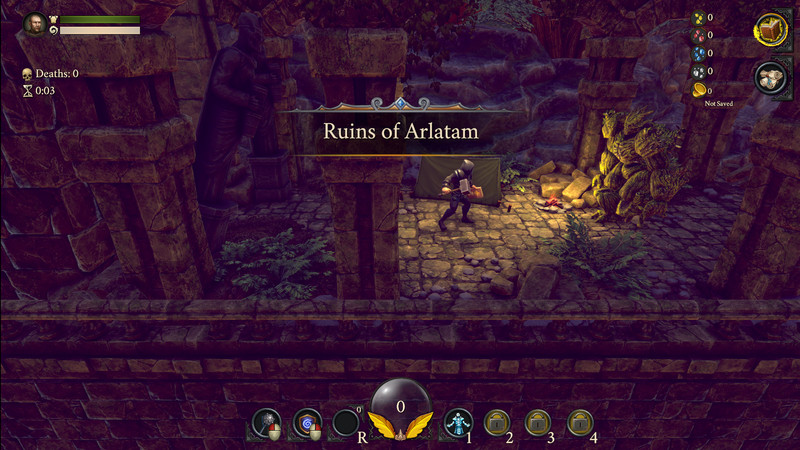 Azuran Tales: Trials offers a different take on platformer gameplay with a hardcore combat experience, punishing levels and brutal enemies to defeat. Don't expect any help as you explore all of its handcrafted levels full of lore, monsters, traps, and unique Bosses. This game is straightforward and hard to beat. Magrath's trickery won't be stopped with just one or two bodies clogging the gears of his traps, so you will be forced to learn and adapt or fail and die each and every time!

Drukandra, the God of the Dead, Ruler of the Underworld, found your soul worthy for his quest. After granting you his blessing, you are sent to hunt down Magrath, an entity shrouded in mystery, who wields great power and wishes to claim the world of Azuran as his own. Only by finding the hidden pieces of the Amulet of Valur can you bring this foe down, but doing so won't be easy. Deadly traps and villainous enemies await you for Magrath knows you are coming, and he doesn't intend to make things easy for you! 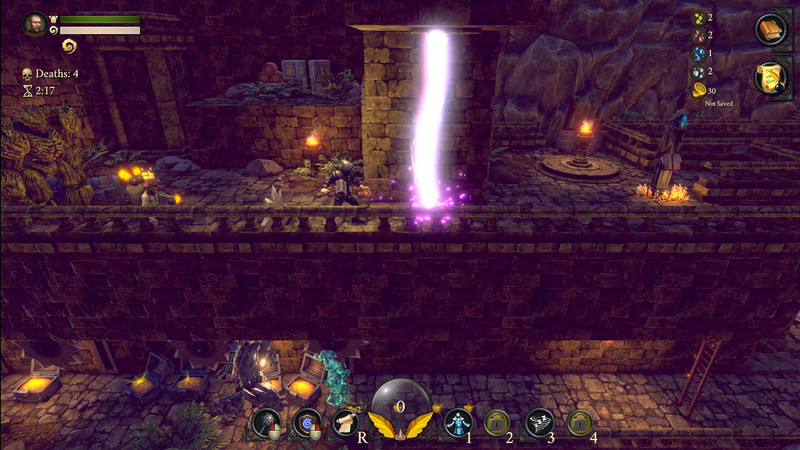 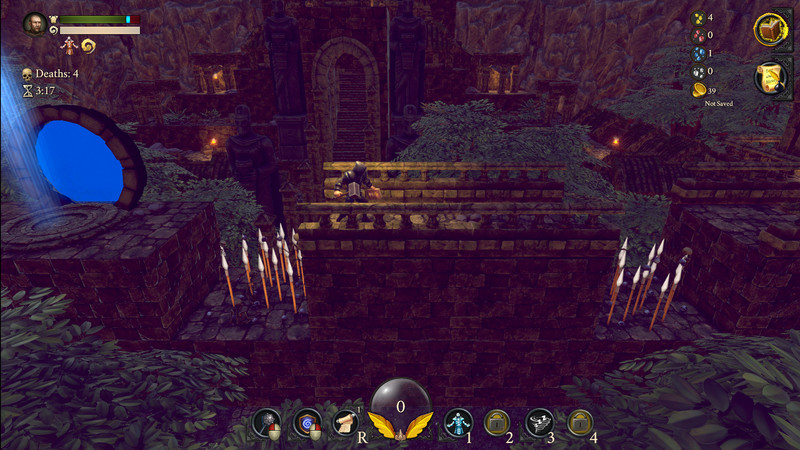 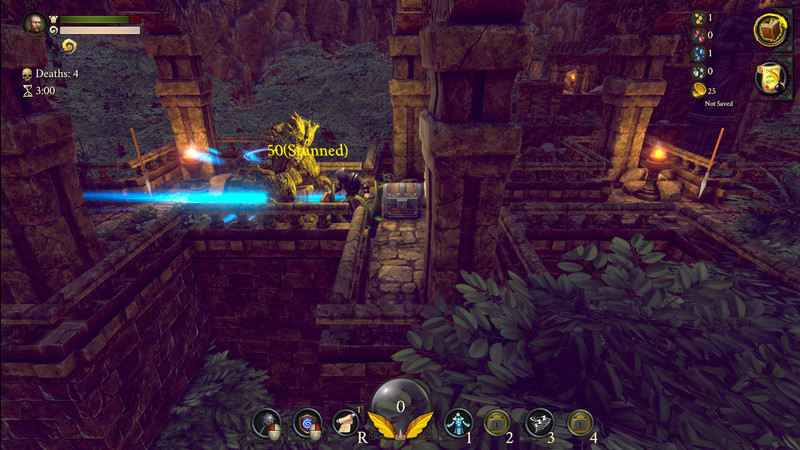 
The game is HARD

EDIT:
Another thing on the plus side
+ the developer is active and responsive to sugestions. Nice sidescrolllng dungeon crawler!
I have got thru about 5 or 6 levels so far, and I may come to regret saying this, but I don't find it as hard as some of the other reviewers, and I am no Platforming Master. Many platformers, like Cuphead, Hallow Knight or SuperMeatboy are too hard for me. I would call Azuran Tales a Platformer-Lite, but the combat is challenging enough.
Some of the bosses are very tough; one in particular is a Mage who kept throwing ranged spells. I tried to dodge them and then get in my whacks when I could, but the spells just kept stacking up. After probably 15 failures, I tried a new tactic and that was go toe to toe with him. He could still throw spells but not as many and after another 10 tries I beat him. That may sound like a lot of deaths but not that crazy for a Souls-like game. In this game there is a save point right before the bosses, who may wipe me out in less than a minute, but I can go right back at em in a few seconds.
. A challenging 3D platformer with his own identity. Not a big fan of platformers, but this one has something that gets me, maybe is the difficulty, or the skills, or\/and the combat.

If you like challenging 3D platformers, give it a try, for this low price, has lots of content and its quite fun.

Ahh.... A shiny new armor! ... Dead!. A fantastically challenging game which punishes you for every minor misstep! Expect to die - a lot.

The level design is fantastic. My favourite moment was when I came out of a dungeon and was suddenly overlooking this massive forestal temple ruins that seemed like it went for miles in the background. Loads of detail was put into making the game world look good, and the end-boss level was just epic.

What I read of the story was good stuff. I liked the dynamic between the paladin and the Death Goddess, though I'll admit - most of my attention went to beating the game.

There is a wide variety of enemies and scenarios in which different enemy groups appear, making just about every fight feel unique. There are plenty of boss battles, and each is a different experience in dying. The checkpoints are generous and will often land you right back in the action when you resurrect.

All the fights and enemies have some sort of weakness to exploit, though in your first playthrough you're often forced to throw yourself at new encounters to learn their telegraphs through merciless one-shots. It can be difficult to discern what will penetrate your shield, and there are a few tricky hitboxes on some of the bosses and traps (those damn sharks!). Dying in the early game can feel crippling as you will lose sigil shards (used for stat progression) quite often, which can lead to feeling like you're falling behind, but don't fear as the game constantly rewards you with loot piles from enemies and chests and by the end, you can easily max everything out.

The controls are very easy to pick up. Once you master the aerial dodge-roll you feel super agile, and with your stamina regen maxed out you can easily outmaneuver most enemies. Vertical controls feel rigid though - especially ladder climbing and pulling yourself up from ledges, which is an integral part of almost every level. It can be a little cruel at times, as your first failed run into a new area can aggro enemies to a ledge where they will then stay, laying the beatdown in the window of vulnerability forced on you when you're yanking yourself up the side.

But no matter how hard and brutal it can be, it can be done with patience and persistence!

Definitely pick this up if you enjoy a challenge!. A challenging 3D platformer with his own identity. Not a big fan of platformers, but this one has something that gets me, maybe is the difficulty, or the skills, or\/and the combat.

If you like challenging 3D platformers, give it a try, for this low price, has lots of content and its quite fun. 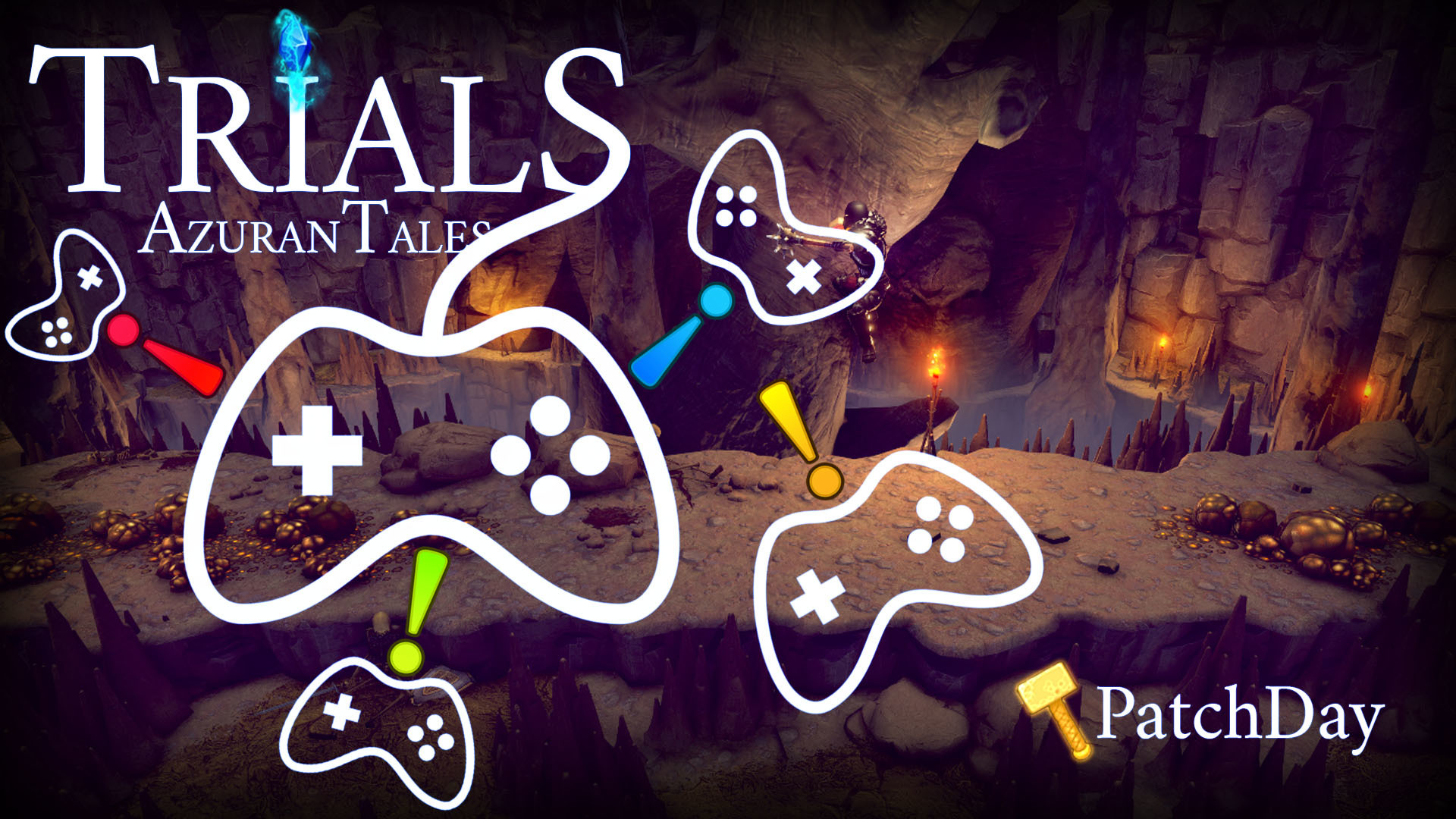 
As promised a few weeks ago we wanted to make an update for improved controller support. Today is the day.

Because we are unable to enter Summer Sale we figured it is a good time to give you guys something in return, thus we have made the update available today with the controller support.

Please send us all the issues you encounter on the community forums and we will try to fix them as soon as possible.

- We have implemented full controller support. We now advise you play the game with a controller.
- You can now move-attack, jump-attack
- We removed the fall damage because everything else in the game can kill you in the blink of an eye
- Whenever Conviction decays outside of combat, you now heal for a portion of unused Conviction
- We have fixed a few issues with some achievements that nobody was able to get
- Various mob health/damage tweaks
- Increased player starting health
- Redesigned the Abbey - tutorial area
- Decreased stamina cost for roll/blocking
- Various beautification improvements (eg weapon trails)
- Better tooltips for interactable items
- Some sound issues have been fixed
- Fixed some patrolling issues on some mobs


Thank you for your support!
Enjoy the game and have a great day!


We have been working hard for the past month in order to release - Azuran Tales: Trials.

We are happy to announce that we are close to finishing the internal testing. Also a big “thank you” to everyone for their interest in our game, we will strive not to disappoint.

It’s been a crazy ride and we are really happy about the state of things.

This message is just to tell you guys, our friends, our community, that we are here, we are working and we are enjoying every minute of it.

Keep an eye on us and spread the word. If you have any questions or comments, please let us know on the community forum.


We wish you all the very best.
Azuran Tales: Trials Team 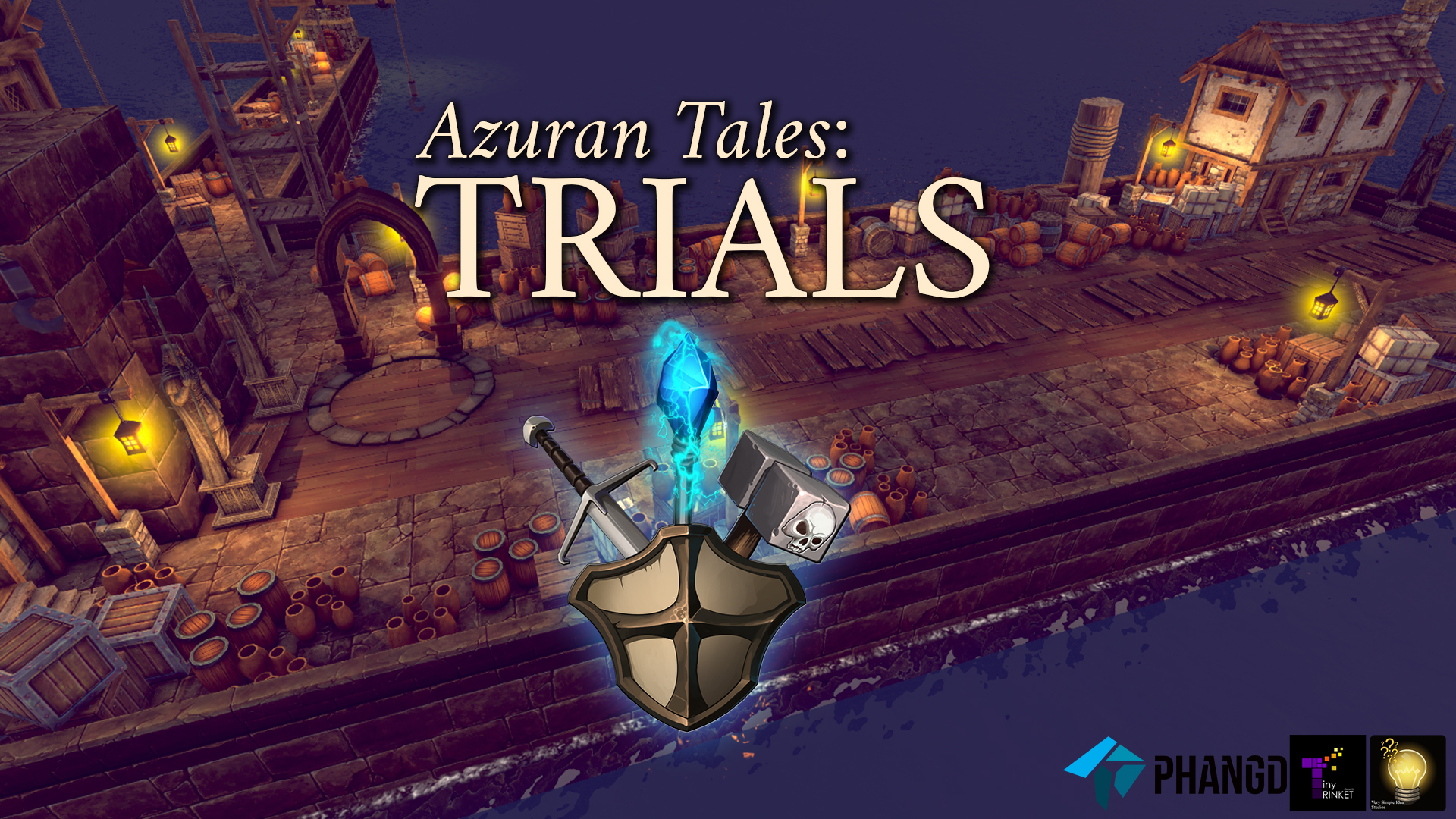 
Our project is now complete.

We had to delay the release date(initially was on 29th) because of the Steam Review that took a bit longer than expected.

This extra time gave us the opportunity to adjust minor issues in the game.

Stay tuned and get ready to rumble starting with 1st of June.

We want to thank everyone for their support and we really hope you will enjoy our game. 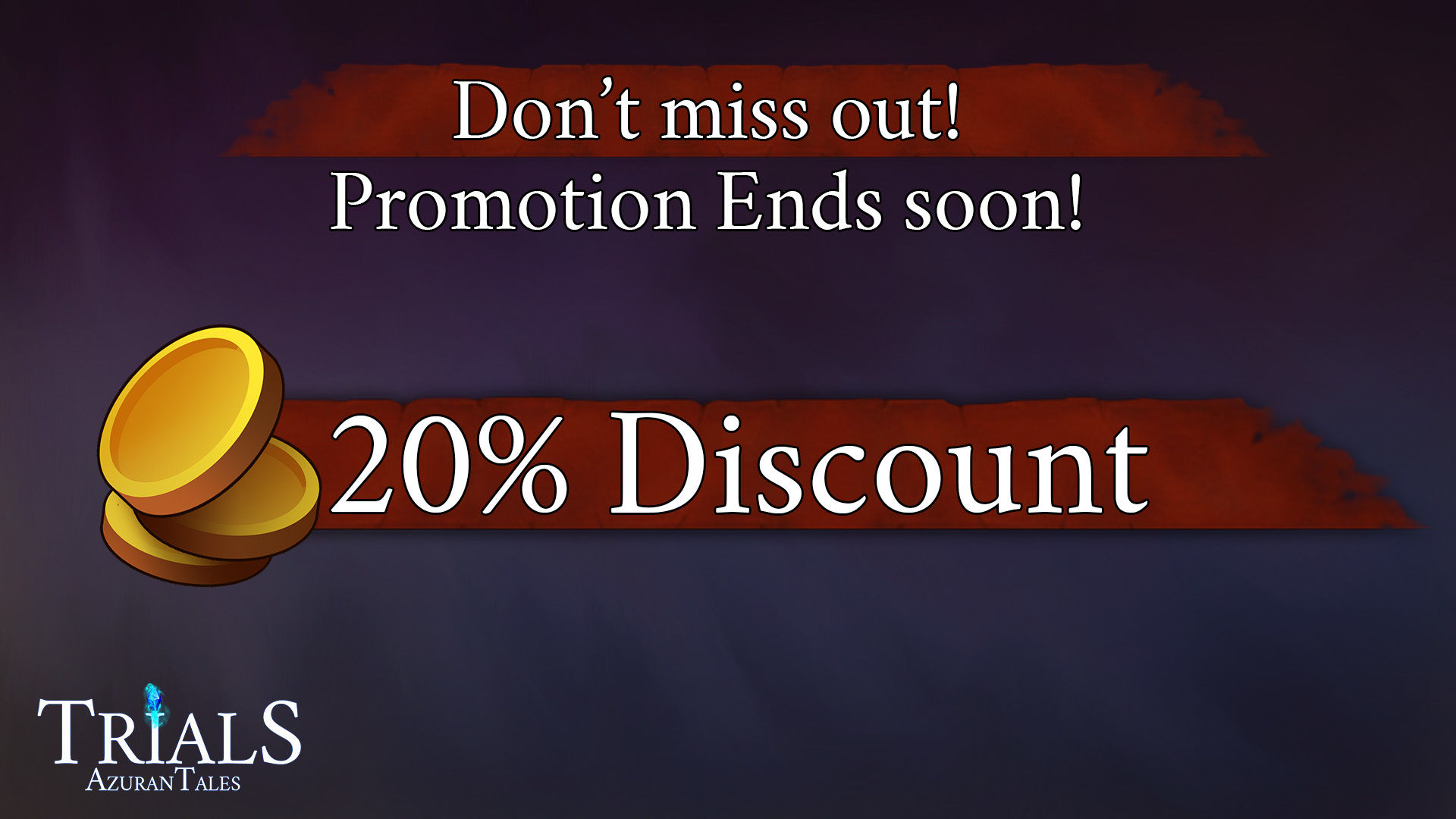 
Don't miss out on the Launch Discount!

The promotion ends in a few hours!


Have a cool day,
TTG Team. We've heard you: 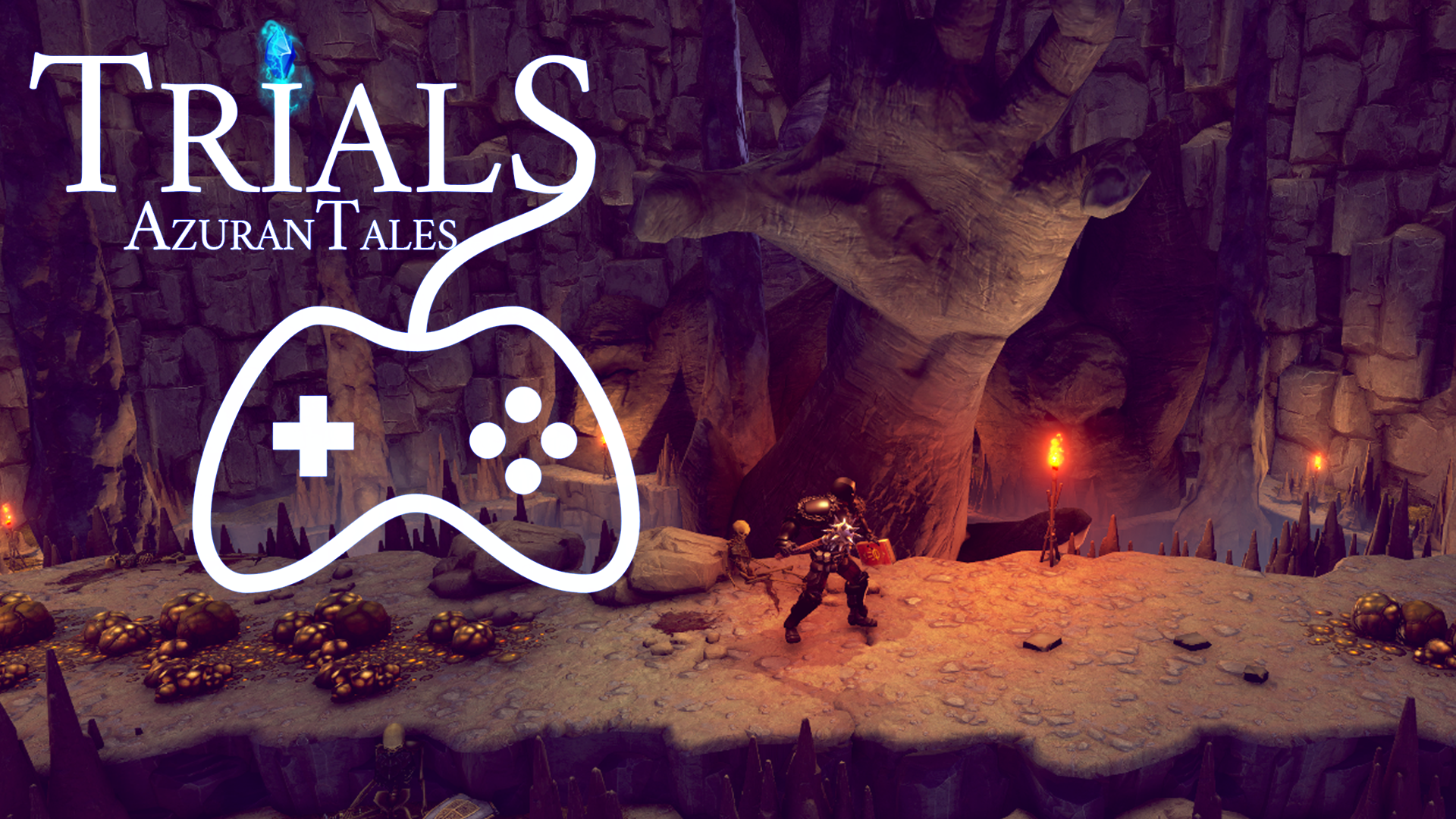 For those who did not buy the game because of this, rest assured it will be available as soon as possible (and hopefully bug-free).

Stay tuned guys and thank you for your support!

Have a cool day,
TTG Team

. Hot- Patch for a crash has been applied.:
Hello guys,


After getting a few reports about the game crashing when starting one of the levels, we are ready with a hot-fix.

Please download the update and enjoy the game and also let us know if you encounter any other issues.

Thank you for your support! and Happy New Year!

TTG Team. Patch LIVE for Steam Winter Sale:
Hello everyone, we have a new patch today.

Known issue - animations, our bane, are still sometimes a bit weird - we are working on it but we need to rewrite part of the animator and will take a bit.
Known issue - the sound volume for ambient SFX and music are not the same - the file themselves have different sound levels - we are still investigating a fix

Achievements - removed two achievements because after a lot of debate we came to the conclusion that they were not fun, like, no. <Orc Slayer, Was that a boss? - removed>

Fixes:
- Fixed an issue that prevented the user to change resolutions
- When not using a controller or mouse+keyboard - the switch between them should create a lot let issues
- We've also fixed some Achievements that were not triggering
- Removed some black text labels that were appearing in the settings screen for toggles
- Fixed some animations for monsters - they should get stuck a lot less now and create fewer issues
- Navigating inside the Skill Book and Lore Pages should not stuck the character in "pause" mode anymore
- Pressing ESC from the keyboard should correctly pause the game and let the user navigate it

Merry Christmas and a Happy New Year everyone! 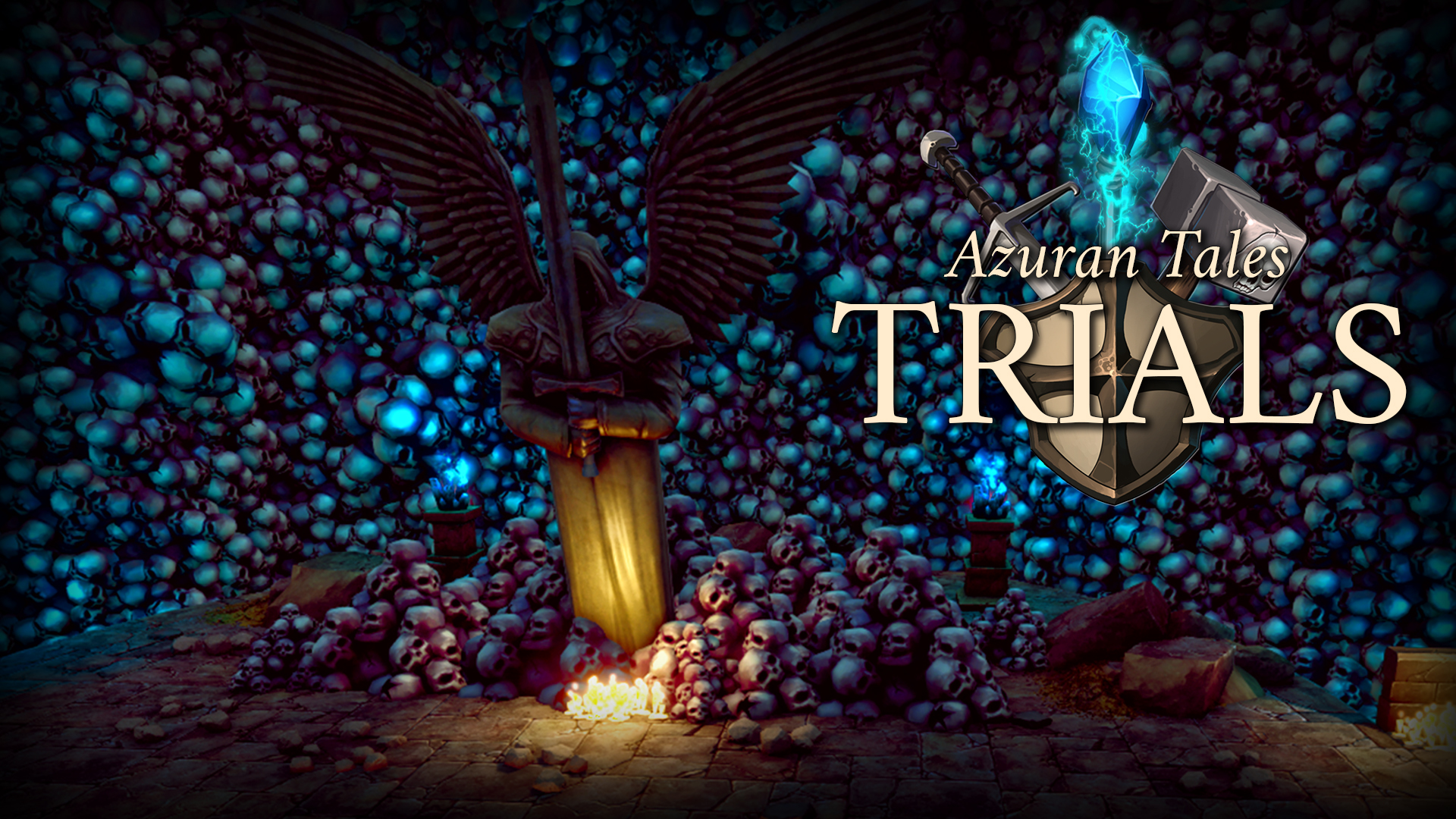 
We have updated the game once again with some tweaks and adjustment and of course some bug fixes.

- tweaked the main character animations a bit more
- we fixed a hole in the level that could make the character fall to his death
- fixed a bug for the Bloodspill - if he died when drain life was active, that drain life would have killed the main character
- fixed a bug for Eldamara and Shellizye - they should not freeze anymore (or not that often anyway)
- other minor tweaks such as - the key indicator for some games was not very visible

As always, please let us know if you guys encounter other issues, we will get on them with vengeance.

We wish you all a cool week.
Cheers,
TTG Team
. Almost there:


We have been working hard for the past month in order to release - Azuran Tales: Trials.

We are happy to announce that we are close to finishing the internal testing. Also a big “thank you” to everyone for their interest in our game, we will strive not to disappoint.

It’s been a crazy ride and we are really happy about the state of things.

This message is just to tell you guys, our friends, our community, that we are here, we are working and we are enjoying every minute of it.

Keep an eye on us and spread the word. If you have any questions or comments, please let us know on the community forum.


We wish you all the very best.
Azuran Tales: Trials Team