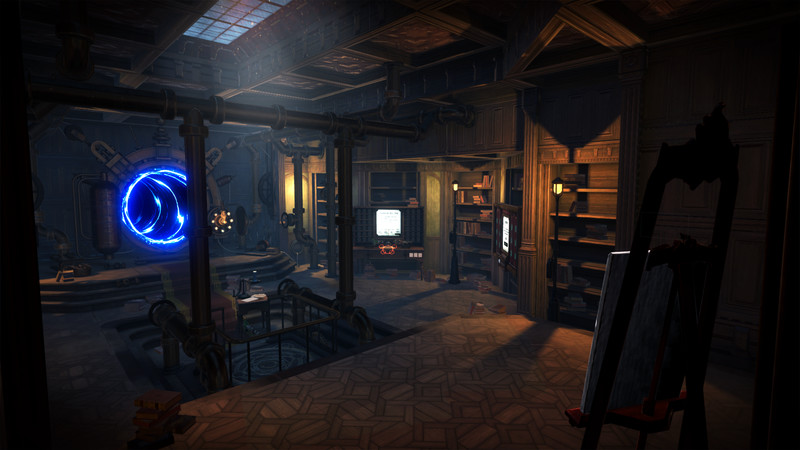 WANDS® is a first-person VR experience that offers fast-paced magic duels against other players online. Equip your wand with a wide variety of spells and battle other Wielders for fame, power, and glory in the fantastic realms of The Beyond. Explore new spells and hone your skills in your secret workshop in between battles. 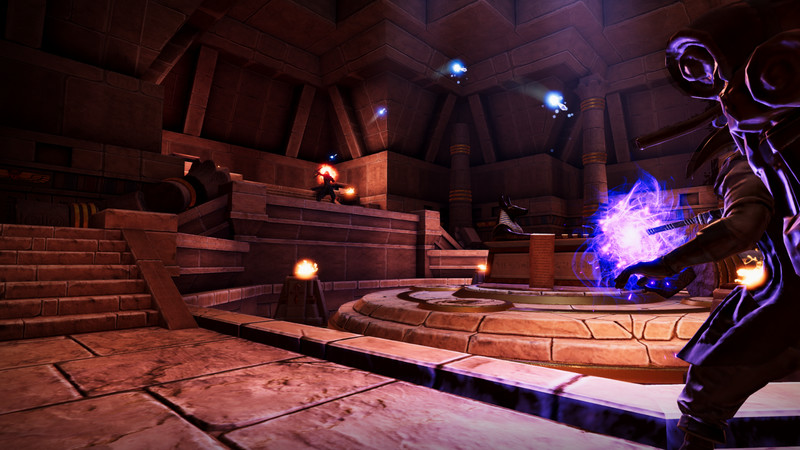 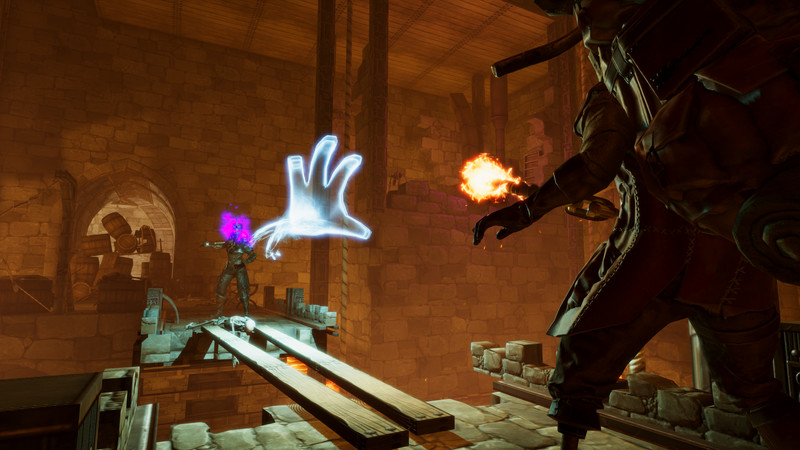 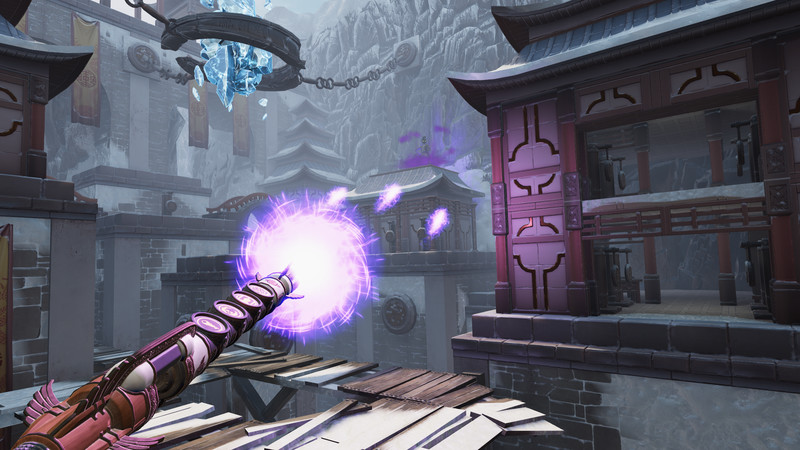 
Damn, i'm only level 9 and this game is TONS of fun, and can run on my pc (gtx 950, AMD A10 6800k) quite well! I do think it could be more fleshed out, however. I believe this game NEEDS an actual bot mode (not survival) for practice. I also think that more clothing, mask, and wand choices, along with spells, could make this game feel much more polished. Overall, 9\/10. I don't like to give this game a bad review, because its pretty fun, but there are a few things that need to be fixed before I give it that,
one - My right controller won't stop vibrating, even after a restart and turning off the vive controller.
two - Matchmaking needs balancing, me level 3 vs a level 437 means that they have unlocked everything and I have the starter spells.
Three - Doesn't tell me how much damage I did through the round, or mana used, only how many pick-ups used.
Forth - Where is ranked matches? Everytime I go into a game, I only level up, but it states that this game won't affect my rating, which I want it too.

Graphics are great, gameplay is fun, not too much content but its not that much for the price its quite good, plus its a refrubished gearvr game which they have done a good job of porting it over.. This game is AMAZING!!!

Cons:
Minor bugs
Since it's new on steam, slighty longer waiting times for a match during certain hours.


I highly reccommend this if you like magic-type vr games.. I genuinely love this game. Wands has a totally unique style of gameplay that strongly emphasises strategy. It's PvP wizard dueling!

There is no free movement here; instead, you teleport to a fixed set of "tiles" in each of the six arenas. This has two implications for your experience: 1) it's super comfortable; the only motion you experience is what you physically do in your space and 2) the gameplay comes down to your ability to control your opponents' access to these tiles. Sure, it's limiting. You don't get to whiz around in VR using the latest creative control scheme. However, gameplay-wise, this is probably Wands' greatest strength; the limitation of movement makes this essentially a full-information game. There are very few cutsie tricks that you discover from the arenas by way of experience (though there are a handful) as you would find in other PvP games. Most importantly, your opponent can't hide. If you understand each arena and each spell, you are perfectly capable of formulating a unique strategy that will surprise even the most experienced opponent.


Mechanics-wise you choose four spells from the 25 available options to equip a "loadout". You bring one loadout into a duel. These are your only weapons and defenses. A bit over half of the spells are projectiles of various sorts that differ in kind (splash or direct damage), cost, and damage caused. Spells, including your teleport ability, cost mana which replenishes at a set rate throughout the duel. You win by getting your opponents' HP to zero or by having the highest HP at the end of the 3.5 minute duel. There are three fixed locations in each arena for health pickups that give 15 HP back and which respawn at a set rate during the middle portion of the duel. Each arena has its own environmental effect including a temporary free teleport pickup, boosted mana regen\/increased damage on a specific tile, and various damage-causing environmental hazards. The newest arena has an environment which forces players to physically move through the arena to avoid storm damage a la battle royale games.


This game is multiplatform with mobile VR. In my experience, most of your opponents will be on Gear VR. If you buy this game on Steam, you're in luck: the skill ceiling is higher! Room scale to allows you to physically dodge some of your mobile friends' attacks.


There is a bit of a learning curve, no skill-based matchmaking (yet), and Wands has developed a fairly active community that play a lot (Full disclosure: I'm a member). This means that you're likely to encounter one of these players when you first enter. To continue playing, you have to be alright with taking it on the chin a few times against one of these guys. Quickest way to learn.


The game is gorgeous, easily the most visually appealing VR game I've played.


As mentioned in other reviews, Wands is purely PvP, with the exception of a mini-game that you can access in the lobby. There is no story mode or AI opponent feature.


There is no in-game voice chat in the Steam version.


This game is fairly frequently updated with new content and the devs are receptive to bug reports and feedback. Since I got the game on mobile in December of last year, they have added something like half a dozen new spells, a new arena, a totally refurbished and beautiful starting area ("The Workshop"), and have made several balance changes. Check the update history. The devs are remarkably timely with updates. I've never actually experienced a game in ongoing development that actually surprises its community with updates; refreshing.. I don't like to give this game a bad review, because its pretty fun, but there are a few things that need to be fixed before I give it that,
one - My right controller won't stop vibrating, even after a restart and turning off the vive controller.
two - Matchmaking needs balancing, me level 3 vs a level 437 means that they have unlocked everything and I have the starter spells.
Three - Doesn't tell me how much damage I did through the round, or mana used, only how many pick-ups used.
Forth - Where is ranked matches? Everytime I go into a game, I only level up, but it states that this game won't affect my rating, which I want it too.

Graphics are great, gameplay is fun, not too much content but its not that much for the price its quite good, plus its a refrubished gearvr game which they have done a good job of porting it over.. A fun VR game where you and one other opponent enter into a 1 v 1 deathmatch against each other. You teleport to platforms around the map and each have 4 unique spells on your wands that you choose in the workshop. This adds a level of stratagy where some spells may counter others in Unique ways.

The game is all about stratagy and conserving your mana for just the right time. It deserves the upvote.. until my opponent departed we dueled for probably 50 minutes while I did about 10 minutes of survival. Had a blast playing an online duel as well as the survival in the Waiting Room(Nice touch devs). Cant wait to hop back on tomorrow to get some duels in. over all a very polished multiplatform game allowing for nice playerbase, I'd say worth the asking price of admission I expect to get many more duels out of this!