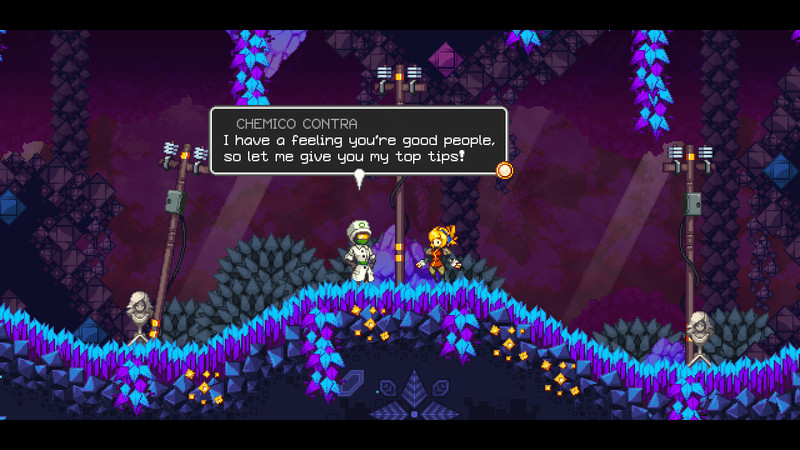 Robin just wants to be a mechanic and help people, but without a license she’s a sinner in Mother’s eyes. Ever since picking up her wrench, the world has been going nuts and she's wanted to bolt it back together. Now Penance is raining down on everyone she loves and One Concern agents are after her.

But something big is going on – bigger than droughts of Ivory fuel and personal conflicts – and Robin’s in the thick of it. 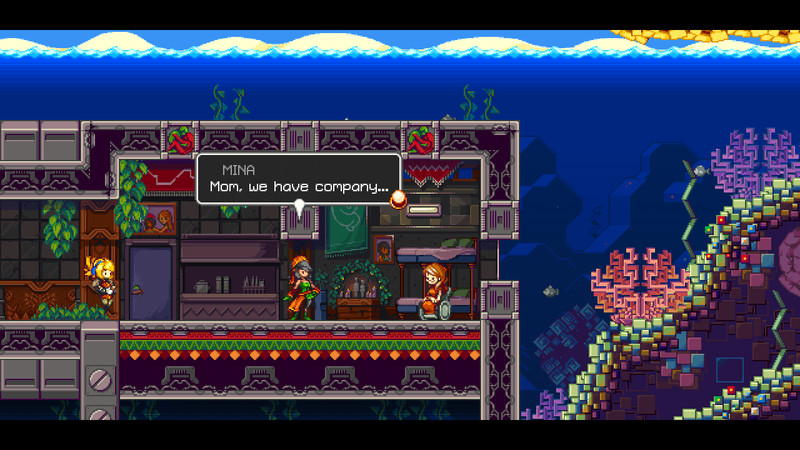 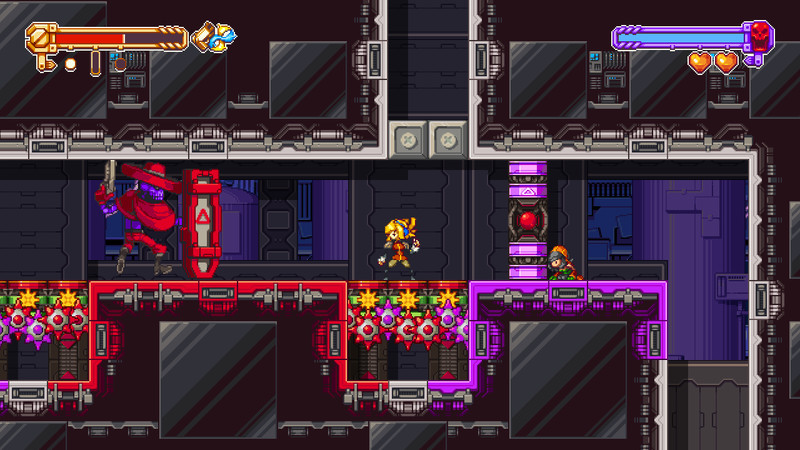 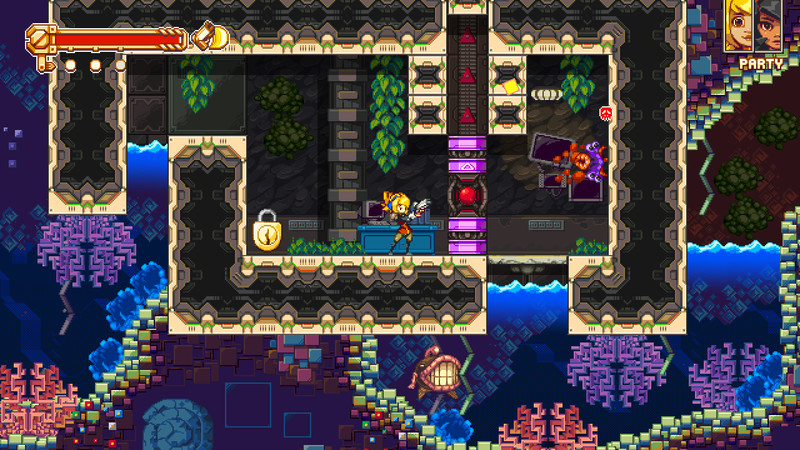 
Iconoclasts has received a lot of praise from numerous reviewers, however, disappointingly, I did not have the same positive experience.

The gameplay is great - especially the wrench mechanic. Iconoclasts is primarily a puzzler, and many of the rooms are well designed and are fun to solve and get through. It\u2019s brilliant, the weapons are not only designed to eliminate enemies, but they serve as tools to solve the game\u2019s puzzles.

The graphics are wonderful, bright and colorful, and the game offers a variety of environments to keep progression feeling fresh.

The story would have benefited significantly with fewer threads. This would have allowed the primary story beats to have more impact and clarity. Instead, by the end of the game, there is so much going on with multiple characters and story elements that it all becomes a muddled narrative mess.

Concerning the dialogue, this is perhaps Iconoclasts\u2019 greatest issue. Numerous scenes span excruciatingly long and are a chore to get through. Moreover, the dialogue is not well written. With revisions, I think the game\u2019s ideas and beats could have been more effectively conveyed.

Signposting is terrible in this game. Multiple points throughout my playthrough, I found myself completely lost on where to go or how to achieve a goal in order to move forward. This is perfectly captured by certain instances where you\u2019re up against invincible enemies, but you\u2019re not visually informed that you need to run or solve a puzzle rather than fight.

I really like the gameplay and movement, it\u2019s well done. However, the serious narrative tone is in complete contrast and feels incongruous as a result. Dragging it down further, the story is not well written and truly struggles to juggle all its elements.. Iconoclasts nails aesthetic, discrete world building and tight controls. It's a varied Metroidvania-style platformer experience that isn't afraid to dip its narrative toes into more serious subject matters and philosophical questions. For the few moments where it slightly loses pace or doesn't quite hit the story marks, it more than makes up for in ups and highlights. Iconoclast's characters and story beats will stick with you for a good while after playing, safely sticking it to the top of the list of memorable indie titles in recent years.
Whatever Konjak conjures up next, I'm sure it'll be fantastic, and I hope for his sake that he'll find a better work-life balance.. Some parts, mostly the art and animation, are excellent. The lore and worldbuilding is great too. But the writing, and certain core gameplay mechanics are just horrible. I have a huge amount of respect for the work that went into the game, but I would recommend so many others over this, like Hollow Knight.. A surreal masterpiece.. I am very conflicted about what to put regarding this game. There were parts of it that I enjoyed, but other parts that I very much disliked. Perhaps the mostly annoying part was the endless dialogue. The story is very long and complex and because of that, you are constantly having your gameplay disrupted to go thru a seemingly endless stream of dialogue boxes and long\/drawn out conversations between the characters. Which is surprising because the main character doesn't talk at all. But all of the other periphery characters don't know how to shut up! I realise this game was made but one person, and he obviously had a story he wanted to tell in very fine detail but it is honestly way too much with the dialogue. If I can use an analogy of an author publishing a book for comparison purposes. There is a reason why books have editors that edit an authors work before it gets published. Because the first drafts are usually very bloated with way too much content that is necessary for the novel to work as a whole. The editor trims down all the unnecessary parts and leaves the novel with a much more poignant story. The developer of this game really needed an editor to do that with the excessive dialogue in this game.

That being said, there were parts of the game (the actual gameplay parts between the dialogue) that were quite enjoyable. It is kind of a metroidvania, but more linear. The boss fights are numerous and quite enjoyable. There is some platforming elements as well as some combat elements that blend together nicely. The retro-graphics are very nicely done and the music is also well done.

Overall, I completed the game in just over 13 hours (it isn't a short one that is for sure - but that is likely because there feels like at least half of my playtime was taken up by going thru the endless boxes of dialogue). I will give this game a thumbs up because it is obvious the single developer put their heart and soul in this game and I do respect them for that. That being said, don't plan on rushing thru this one - it takes a lot of time and patience!. What a weird experience of a game. Overall pretty good I would say. The game play was fun and the puzzles were alright. Minus a few irritating instances. Get it while its on sale, a good play through. The story was well done and surprisingly captivating with good world building. My biggest gripe with the game is the character design\/writing is\u2665\u2665\u2665\u2665\u2665\u2665 Large majority of the characters are extremely self destructive or irritating with no redeemable qualities.. Lots of frustrating (gameplay) elements make for a far less enjoyable game than what could have been. Think twice if you also came here for the Metroidvania tag.. Careful! It's more an action\/puzzle platformer, than a metroidvania!

Gameplay is very good, nice puzzles, satisfying combat and creative boss fights. 9\/10
The world is very colorful and varied, but pretty linear for a metroidvania. 9\/10
Artstyle and soundtrack are obviously amazing. 10\/10
The story as a lot of good ideas, interesting characters, is very complex and actually darker than you'd expect from the colorful screenshots. Unfortunately the implementation\/execution of some story elements seem a little bumpy or not completely thought out, which makes it very confusing to follow the plot in the first playthrough. Also it doesn't really fit in with the vibrant artstyle. 4\/10