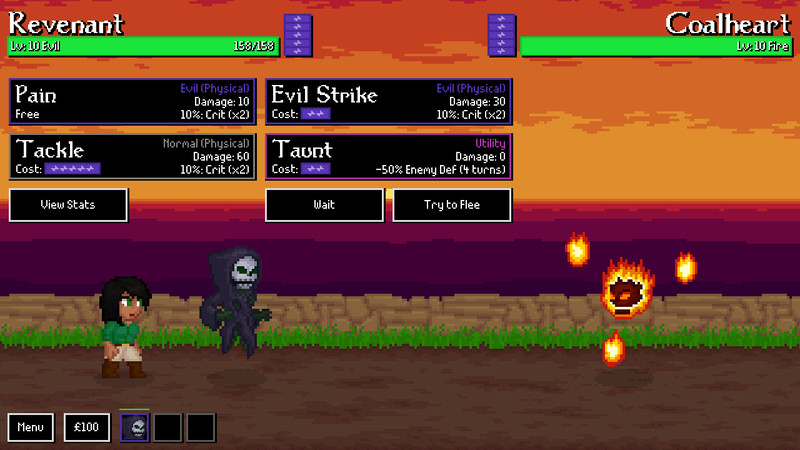 Ghostlords is a strategic turn-based RPG that tells the story of a post-apocalyptic haunted Great Britain. Experience the new world, capture wild spirits, and put together a team of ghosts to help you battle the forces of evil.

The year is 2038. It has been twenty years since the Rending - an event that left most of the world's population dead, their souls severed from their bodies. These souls linger, and survive as ghosts.


The surviving humans have done their best to rebuild society, but the world is a very different place. Ghosts roam the land, wild and unpredictable. Their magical abilities make them extremely dangerous to anyone who gets on their bad side.

There are rumours, however, of humans developing supernatural abilities. Apparently there are people possessing the same magical abilities as the ghosts, and even people able to control the ghosts themselves. Ghostlords tells the stories of these individuals and the world they live in. 7aa9394dea 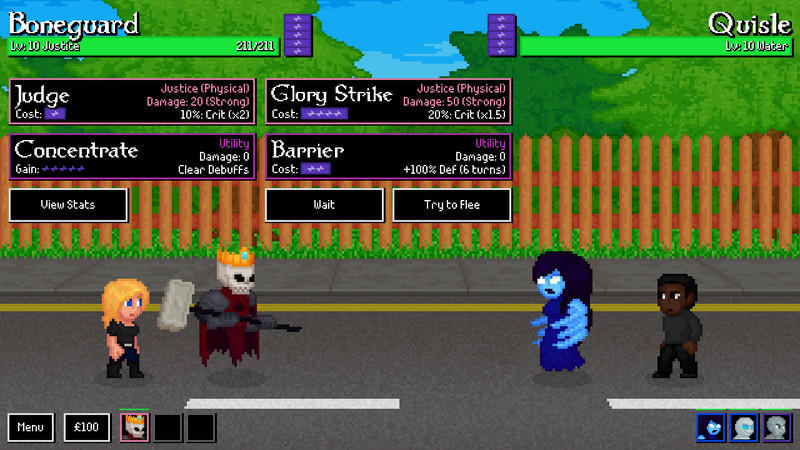 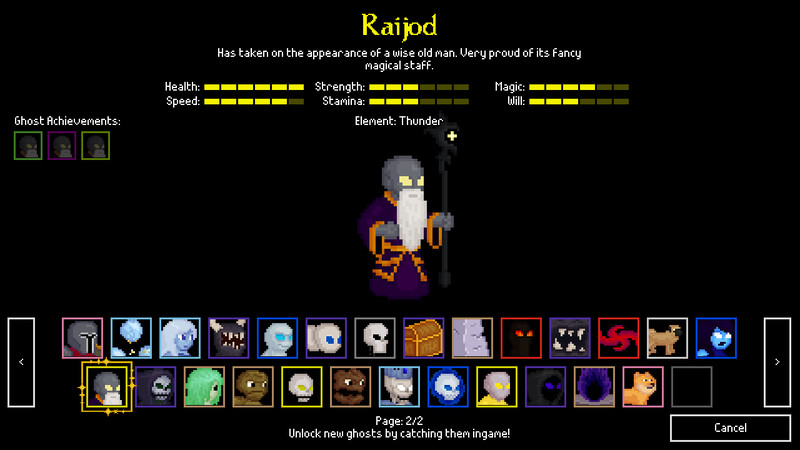 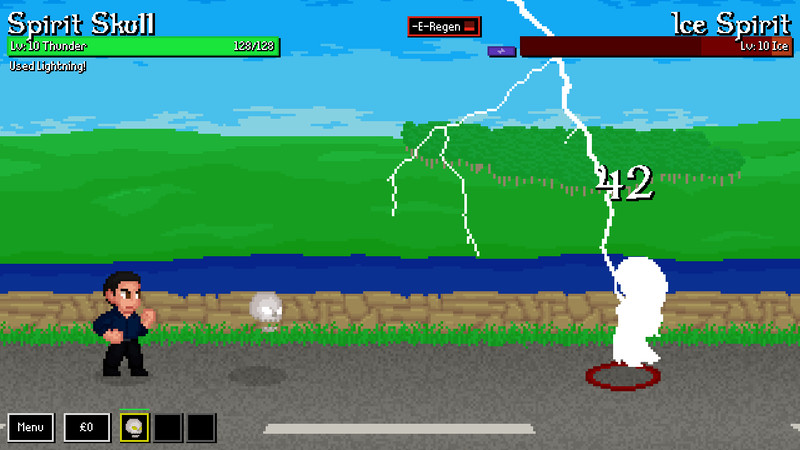 9\/10
An underated gaming gem!. Hmmm, there are a few things I'm not sure of (colours, do they matter? - No, that wasn't a racist pun :P - There are colours of "flags" along the path of the adventure) which may be of importance I suppose but TBH I don't really care...

Update:
Yes, colours matters, red=chance encounter (don't know if they're random or not but you won't know what it is beforehand), green= healer and so on.

It is really hard to explain what this game really is, as it's not really a game that fits a normal genre (it's at least not like anything I've ever played), I will stick to it having a "CCG feel" to it as you have four different choices at the start of a battle (and three ghosts to choose from) and you'll have to think about what counters the ghost you face best, what would be the best choice. (increase damage\/defense\/debuffing enemy and use your round without dealing damage or attack and take more damage from enemy's attack)

It will have you planning, have you thinking, have you learning what ghost you have - if any - that's best against that other ghost's powers and also when you're at a merchant you think about whether defense for survival or attack for faster kills and so on is best.

My initial review was after me having played a game a lot deeper than it'd appear at first glance for about an hour, now after thinking about that round and having the basics down I played another 2 hours or so and loved every minute of it, conclusion:
I do not in any way shape or form regret having spent money on this game, love it.. This game turned up in my discovery que and I had never heard anything of it before. It's a monster catching game in a scenerio format. It's fun in seeing the different ghosts (which are well designed and visually appealing) which all have different strengths and weaknesses. While there is some unbalance in some ghosts being more powerful than others, it's not out of hand so it doesn't take too much from the gameplay.

The scenerio 'areas' have multiple paths you can take that could make or break your run and introduce you to many of the different types of ghosts. You do have to make some strategy on the fly and hope the RNG gods are smiling on you, but not so much so that you'll get frustrated.

At the start of a scenerio, you get to pick which ghost you start with and have to encounter 'wild' ghosts to unlock more for chosing in the other scenerios or if you chose to do a re-run to beat your high score.

All in all, this really is a worthwhile game if you enjoy monster catching RPGs with a bit of a twist.. So this is a pared down trail-blazing pokemonlike roguelike set in England following a ghost apocalypse.

It's got some downsides, though.

The graphics feel retro in a garish, MS DOS, unpleasant sort of way. The central story feels profoundly unfinished, with five semi-interlocking 1-hour "campaigns", all of which introduce aspects of the broader metaplot and then completely abandon them at the end. One is just a straight up survival mode with a thin veneer of plot over it, and the other four range in quality, depth, and tone from wacky and brisk to relatively serious and immersive.

The pokemonlike elements feel a bit incomplete, too, and they can clash pretty heavily with the roguelike elements. Example: your ghosts level up as they fight, and every two levels they get to pick a stat boost. AFAIK, they have no stat growths on their own, they just grow as you boost them. You can buy boosts from stores as well, and you need to, because wild ghosts and ghost trainers all scale with your (level + how many stat boosts the game expects you've bought by now). Money is a limited currency, harvested from fallen trainers and wild ghosts, and healing is expensive and scales with your level, so if your run starts off well, you end up literally unstoppable, and if your run starts off poorly, all you can do is constantly swap out your wounded ghosts for wild ghosts until eventually you knuckle under.

Furthermore, combat isn't *too* much more complicated than "hit enemy with correct element". There are dual-type ghosts, and you can teach any ghost any type of move, and there may even be STAB bonuses (they're not mentioned in any tool-tips, and I wasn't able to satisfactorily test for this, but I'm willing to believe), but all attacks pull from a single energy pool that refreshes slowly to a very low ceiling, and this means combat usually flows like this --> weak move, weak move, CLOBBER THEM, weak move, weak move, etc.

There are some status effects, mainly increases to attack or defense or buffing your own energy pool, and there is a burning effect that is a massively underpowered temporary poison, but strategy is pretty limited. Either one of your three total ghosts has type advantage on the enemy and you have enough speed to go first\/enough attack stat to mow through their obnoxious tank-levels of defensive stats, or the battle is a grindy long-animation-time slugfest.

Now, it may seem like I've just been relentlessly ripping on this game for these past few paragraphs, and I have, but look at that first sentence in the review.

Do you see how tasty it is?

I want this game to be the best that it can be, because that concept is absolutely amazing.

At ten dollars, even with its flaws, I think Ghostlords is a reasonable buy. On 50% sale, it's definitely worth snapping up.

But don't go in expecting it to be perfect. It's a diamond in the rough.

One that I sincerely hope its creator will follow with a more carefully excavated sequel.. The simplest way to put it, if you like or love playing Pok\u00e9mon you need to play this game. Its downside is that just like Pok\u00e9mon, Ghostlords may get repetitive after a few replay and once you completed everything in the game there really nothing much to do anymore but the different campaigns, type of ghosts and typing for the ghosts just like Pokemon\u2026keep the game fun and enjoyable to play and I would definitely recommend this game to any turn-based RPG fans especially Pok\u00e9mon fans.. Shaman King meets V for Vendetta with the gameplay that Pokemon would have been very wise to have used instead of the overcomplicated thing it went with. This game is the ultimate underrated gem of the indie circuit, right up there with Card City Nights in its sheer affectionate parodying glory. Ok, so I don't get the joke about hating anime or liking it, but this thing still manages to surprise and challange me long after I've earned most of the ghosts.

There are several campaigns, which while some of them are short, others are long and surprisingly hard. Each stars a different protagonist with different goals, though many of the minor events happen in more than one. The later campaigns are more serious and dark than the beginning ones, as well as being less directed, word of warning, you may find yourself wandering around not knowing what to do if you don't play the easier ones first. Sadly, I can't tell you nearly anything without spoiling it.

I have returned to see new ghosts I don't even need to catch, which is a bonus. What little mod content there is is satisfactory, though I'd REALLY like to see a really cool looking custom ghost besides the Nevermore sometime.

9\/10. The only thing keeping it from being 10\/10 is that the game contains TOO MANY funny refrences and jokes so its hard to see the heart of it.. Literally just played for ten minutes, it is really good. Simple yet challenging nice 'feel'. This is a little gem, graphics aren't going to grab people in, but they suit the game really well.
Very surprised at how good a game this.
edit
Played a bit longer, it is well balanced and pretty tactical, it's a little hidden (hopefully to be found) gem.

Coronavirus is creating extreme change. The search community is heading toward Google Trends for insights. Google Trends is becoming more useful now in this moment than at any other time.Google Trends offers a peek into search trends as the world goes through massive upheavals due to the coronavirus pandemic.A useful way to discover insights is to view the different time phases, like a time lapse.Use the time settings to see the differences across your region at the 12 month, 90 day, 30 day,…Ver más
Viernes
0 Comentarios