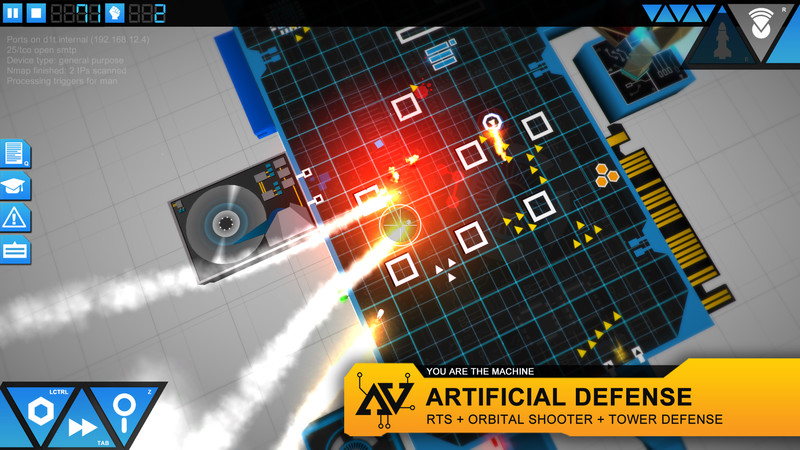 "It's a yummy cocktail out of a AC130-Top-Down Shooter, RTS and a bit of Tower Defense. It's surely different, but it works out!"

Defend your Operation System (OS) against intruding creeps.
The execution might be a bit harder, though.


Firing off miniguns, launching Hellfire missiles, dropping incinerating Hades-Bombs and colossal asteroids, deploying mighty railgun and acid towers and spawning your own Intrusion Counter Measures (ICMs) to reconquer corrupted databases and firewalls are just some of the actions you can take while fending off the creeps. Earn RAM and upgrade your arsenal and hardware-level. Start as an analog punch-tape system and evolve into a quantum A.I. mainframe.

There are 21 offensive weapons available, reaching from outdated flintlocks, over maverick-missiles to devastating meteors and neutron-bombs. You can switch between three pre-loaded weapon categories and launch the installed weapons every few seconds. Each round you fire costs you RAM and each weapon type has its own unique cooldown so you must choose wisely and adapt quickly to different situations. But beware, aiming requires some skill. Creeps are moving targets and your projectiles need some flight time before impact. You can unlock and install new weapons in the uplab.[/b]

There are 21 defense towers available, reaching from pistol-sentry-towers, over incinerating flame-throwers to powerful long-range railgun towers. In addition there are 7 production towers which produce your main resource: RAM (Random Access Memory). Yes, building up a small RAM economy is very important, in order to keep your system routines running. Towers must be deployed by an expensive capsule drop and you have to find the sweet spot between the right amount of resource production towers and the performance of your defense perimeter. You can unlock and install new tower versions in the uplab.

Spawn Intrusion Counter Measures (ICMs) in order to conquer corrupted system-structures like databases, honeypots and firewalls. Databases e.g. spawn datablips, which carry valuable data and head for your backup-devices. Every datablip successfully arriving at its destination releases a certain amount of RAM, so you should do your best to protect those important but vulnerable convoys. b4d347fde0 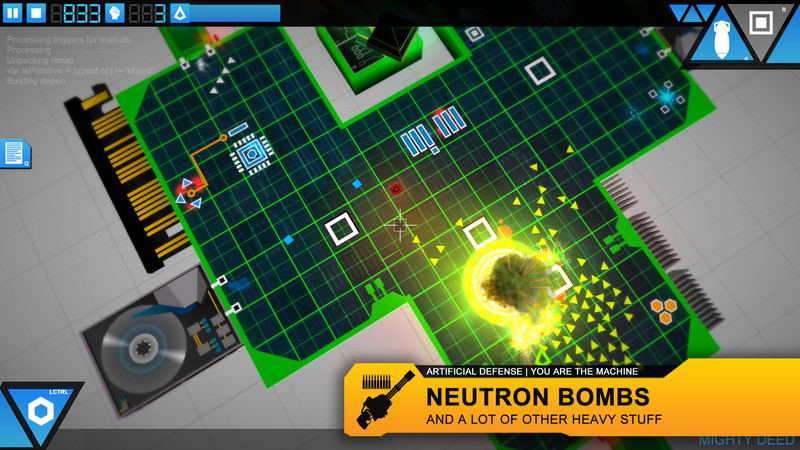 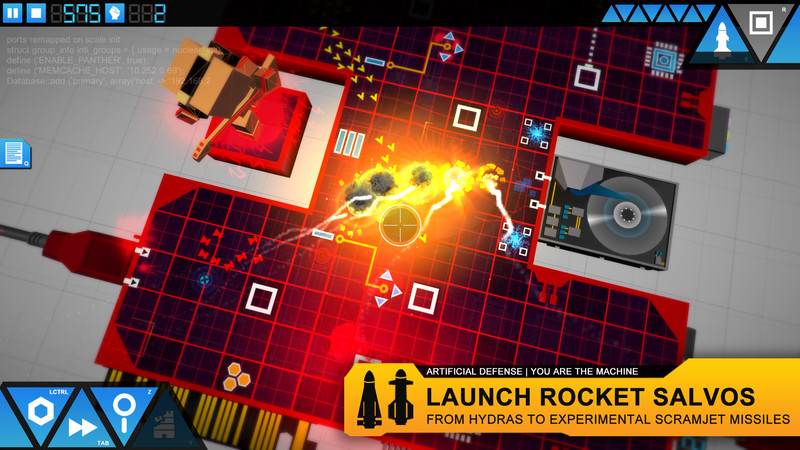 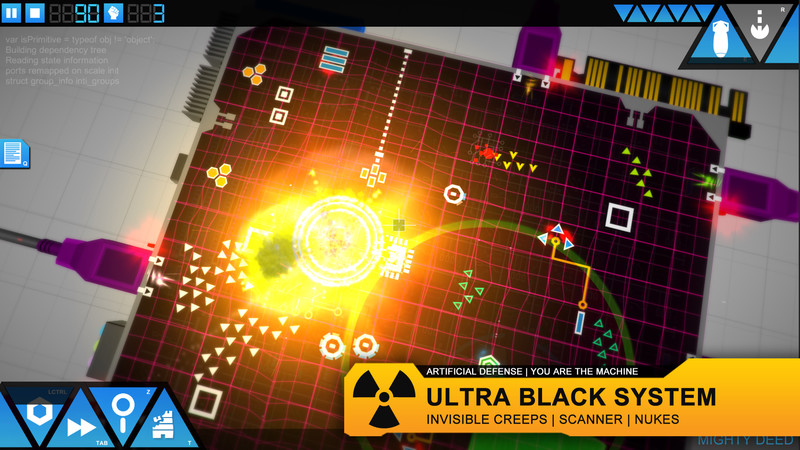 
To start off:
The creator of the game is a amazingly kind guy who's a huge inspiration to anybody interested in the games development industry. Genuinely, if you have a issue - you can contact him and he'll help you none-stop until the issue is fixed. He'll go out of his way for you, if that doesn't have you sold, read on!

First off, the game is very unique in the way it works. From how you gather points to update things, to how you kill the enemies. The thought of a top-down shooter mixed with Tower-Defence and a tiny hint of RTS is a amazing idea and I'm excited to see more of the developers games.

The developers attempts at a mixture of visual styles; ranging from some cell-shaded, to the clear abstract style definately gives the game a very unique look; the geometric enemies make it very easy for the player to see where they're heading and is definately a positive for the game.

Furthermore, the unique sense that the game goes for somehow helps you get immersed in the game. The attempt at a story is room for huge props considering the game could have easily went without any explaination at all - you're just there to kill stuff and that's it. No; the developer is clearly dedicated and for the things that he does, deserves far more than just \u00a33.99. At such a modest price - how could you not buy the game?

TL;DR:
The game is good, buy it.. A nice visually stunning game having both RTS and TD elements. However, TD is kind of an optional element in this game. So, technically this game is an RTS. This game has really beautiful and decent(minimalist kind of.....) graphics. Totally worth it!. First off, don't expect this to be your run-of-the-mill tower defense game.

This game focuses heavily on resource management and plays more like a hybrid shooter\/tower defense. The tower cost scales up quickly so you can only afford to place a few strategic ones to back you up. The rest you have to shoot down with projectiles\/missiles\/bombs manually, and every one of those costs resources. So this is not one of those place towers and watch things die TD games. It is more challenging than most TDs, but has an interesting balance. I found it to be quite enjoyable, though frustrating at times in a type II fun sort of way.

The developer is very active. Just today I had an issue with the game, which I posted on the discussion board. Someone on the board picked up on it, notified me that the developer was offline at the time, that he has forwarded this to him. The issue was acknowledged, responded to on the board, solved, and patched within 24 hours of the issue being posted on the board. For an one-man-show developer, that is impressive.

In short, if you're looking to try a new TD hybrid that is challenging, I would recommend giving this game a try. It's a fun indie game with a developer that I feel is worth supporting.. This is a truly original game.

From the upgrades through the graphics and on into the music, I love it.

It starts slow and is, just for reference, incredibly tough. It gets easier as you get into the higher levels of upgrades, and I yelled in frustration a little, but it ended up a great game.

The level of difficulty is pretty intense, though.. Cool mix of simple genres that work together well, and is a fun game to play, and challenging, with a nice upgrade path. Love the music and graphics. A game in my library I keep coming back to.. A very interesting mash-up of several game types: tower defense, the old Missile Command arcade game, and lightweight RTS base-building, all overlaid onto a Tron-like theme. Gameplay is engrossing and the level of freneticism can be dialed up or down according to your preference.

This talented young indie developer clearly has a bright future in game design and deserves your support. The amount of money he's asking for this little gem is a pittance; I spend more on breakfast every day. Give this guy some coins so he can keep doing what he's obviously very good at without being weighed down by the whims of greedy investors and idiot MBAs.. This game combines three different elements (offense, defense, and resource management) into a really fun, unique and intense experience. If you're looking for a mindless tower defense game, I'd probably look elsewhere. You'll be constantly shooting creeps, building towers, and capturing obejectives.

The concepts in the game make it easy to learn, but the levels quickly become challenging. The objectives in each level make you prioritize different things and keep the game interesting.. My very first impression of Artificial Defense: the discussion forum. The developer is very active in the community and is highly receptive to feedback and actually gives a \u2665\u2665\u2665\u2665 about the game. This deserves credit where it's due.

And to expand on that original impression everything in the game is quite sleek and thematic. Nothing notable was left out in this regard that I could see.

As kinda a mixed bag, I can tell that the optimal input device to play with is a controller with an analog stick. Using the mouse to aim was a bit unintuitive for me, but ultimately I figured it out okay. Using the keyboard to aim is possible, but based on splitting the shots of multi-round salvos effectively, I would highly recommend against it. I don't know if my initial struggles with keyboard\/mouse controls are more a factor of myself or the game.

And finally, the price is right. Especially if you're picking it up on sale like I did.. Was entertaining for a while. Just enough to keep me playing. (my actual play time is less than it shows)
In general for me, the orbital shooter aspect isn't too entertaining, and the tower defense aspect is very lacking.
Upgrage system is disappointing.
Gave up after failing multiple times on the final stage of the Soother category because after spening a lot time on it i lost an objective because an enemy took out one of my ICMs since the area to place towers is extremely limited.. A nice mix of genres.

Artificical Defense is not just an ordinary TD game, because you spend only ~15% of total gaming time on postioning and upgrading towers. The game contains some RTS elements. You can place "mines" and increase you "gold" income defending "harvesters".

You will spend the most of gaming time on aiming the enemies from the orbital. It' really cool. You have 3 different weapons: cannon (a couple of fast but weak shots with small area of effect), rocket launcher (average damage and average area) and bomb (one slow shot with huge damage and area). Every shot cost "gold". So you can't just shoot, because you will out of money soon. You must aim carefully. Every shot has delay before impact. If you kill some neutral enemies this will have bad consequences.
I found this part of the game the most interesting.

You have a main objective and 2 bonus objectives for every mission. If you complete them you get "RAM" in-game value. You can spend it on various upgrades for weapons and towers beetwen missions.

I like the game setting. You are defensive program which proctects the computer. Actually, i can't undestand why the programm use Rockets and Bomb inside PC. It's nonsense. I would replace them with Anti-virus, Firewall, etc. It would perfectly fit.
Anyway, i like how the game looks. UI design is undestanding. Effects are at the proper level.

What i didn't like.
- The first tutoring mission made me angry. You have to make exact actions but sometimes you don't undestand what you need to do. I wish developer improves it.
- There is the same map for several campaign missions. Yeah, every mission has diffrenet objectives and enemies' waves every time . But i would like to see more maps in the game.
- Music is good. But there is only 1 track for 1 chapter. It gets annoying very soon.
- I would like to see more diversity in towers and enemies.

Game is good (especially for one man made). Game is cheap.
If you see this game on a sale , I recommend you to buy it. You will like it.